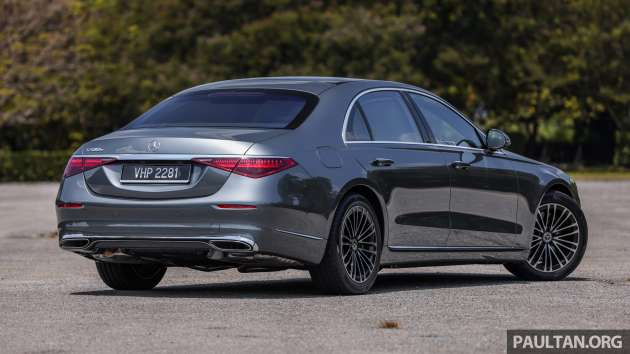 The W223 Mercedes-Benz S-Class is available in Malaysia in a sole S580e plug-in hybrid variant. The brand’s flagship model and successor to the very popular W222 S-Class is priced at RM708,888. That’s a lot of money for something on four wheels, but Hafriz Shah reckons that the S580e is an absolute bargain.

That’s right, a bargain – there’s method to that “mad” statement, as you’ll find out in this video review. Smallish 19-inch alloys with Hankook tyres aside (there’s a reason for this), the Malaysian spec S580e is a variant at the top end of the S-Class tree and it’s very well specified – without the quirks of Malaysia’s CKD local assembly, this car’s natural price would be in excess of RM1 million.

Power goes through a nine-speed 9G-Tronic automatic gearbox and the big Merc gets from 0 to 100 km/h in a hot hatch-beating 5.2 seconds. But more important is the 100% bump in all-electric range, to 100 km on the WLTP cycle. This is thanks to a lithium-ion battery that has more than doubled in capacity to 28.6 kWh. The claimed combined fuel consumption is an unbelievable 0.6 to 1.0 litre per 100 km.

The kit list is very long, as you’d expect from a flagship Mercedes-Benz. Highlights include the super advanced Digital Light LED headlamps, Tesla-style flush pop-out door handles, a fingerprint sensor for saving driver profiles, Airmatic air suspension with adaptive dampers, panoramic sunroof, front and rear Qi wireless chargers and an upgraded 64-colour ambient lighting system with 250 LEDs (was 40). The latter is spectacular at night and is visible even in the day.

Also on are a 16-speaker, 760-watt Burmester 3D surround sound system, plus soft closing for all doors and a hands-free powered boot.

The main event is in the rear, which has power-adjustable multi-contour seats with heating (including the pillow headrests), ventilation and an ottoman with calf massage function. The chairs are covered in Nappa leather, as per the front ones with memory and massage. Rear passengers also benefit from twin 11-inch touchscreens and wireless headsets, along with a seven-inch Android tablet in the centre.

So, is the latest Mercedes-Benz S-Class in 580e PHEV form the best car in the world? Our man answers this question in the video above. Do you like this new look, though? And this might be just me, but why aren’t there more of the W223 around? In the W222’s heyday, the Mercedes limo was everywhere; today, even the BMW 7 Series with the huge nostrils is a more common sight than the Sonderklasse. Just me, probably.