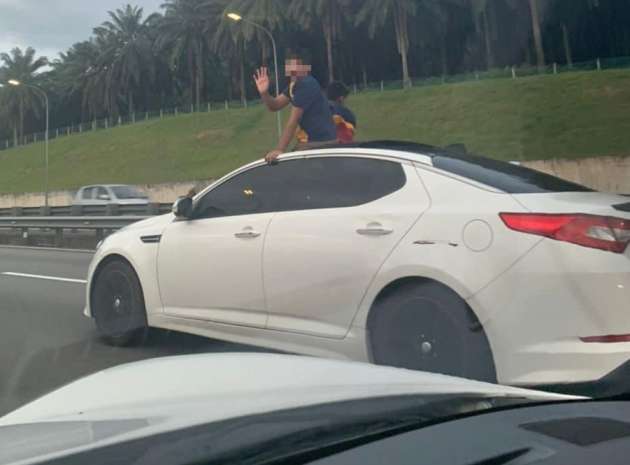 If having half your body out of the car from the side windows in a moving vehicle isn’t cool enough, how about sitting on the roof instead as the vehicle whizzes along, using the sunroof aperture to provide the necessary access? Surely it can’t get any cooler than that.

In a post made on the GetREC Facebook group page, Brandon Tan caught sight of such an act on the North South Expressway, north bound, passing through Senawang/Seremban. In a couple of photos uploaded to the group, two kids can be seen with their bodies protruding out of the top of a moving car, with one of them visibly utilising the roof as a seat. The car was said to be moving along in moderate to heavy traffic at this point, at an average speed of 60-80 km/h.

While the joy of unrestrained freedom is undoubted, it is also very dangerous. A sudden braking action could cause a person in such a position to be ejected from the moving car, and the result could very well be fatal, especially at those speeds and in such traffic conditions. 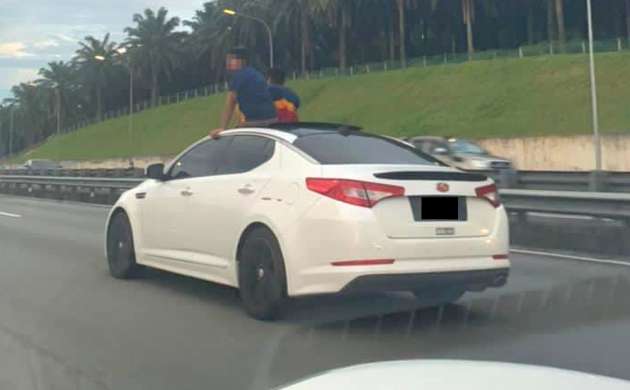 Such behaviour is also punishable by law. Earlier this month, it was reported that an insurance agent was charged at the sessions court in Ipoh with three counts of endangering his children by allowing them to stick their heads out of the window of a moving car on March 22

The man was charged with exposing his three children, aged four to eight, to danger in a moving car in a manner that could likely cause physical injuries. The children were seen sticking their heads – and bodies – out of the moving vehicle in a video that went viral.

The offence is punishable under Section 31 (1) (A) of the Child Act, carrying a maximum fine of RM50,000 or a 20-year jail term, or both, upon conviction. So, the next time the kids want to engage in such behaviour, tell them no. You could regret allowing it to happen, in more ways than one. Be safe on the road, folks.