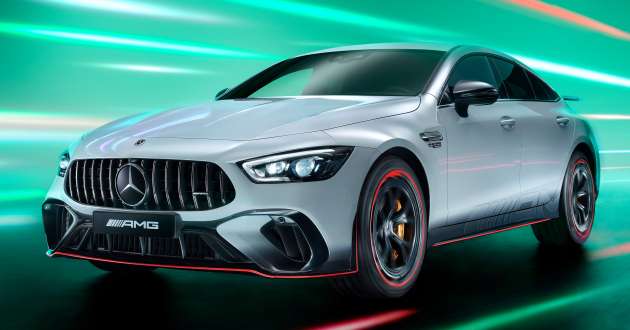 Mercedes-AMG isn’t done celebrating its 55th birthday this year just yet. Following the introduction of Edition 55 versions of the A 35, A 45, CLA 35, CLA 45 and G 63, the performance arm of Mercedes-Benz has now unleashed this, the new GT 63 S E Performance F1 Edition.

Lengthy name aside, this special take on the plug-in hybrid version of the GT 4-Door Coupe features unique styling elements that pay tribute to the brand’s highly successful involvement in Formula 1 – eight consecutive constructors’ championship titles are no joke.

The F1 Edition can be easily identified from the outside by its non-metallic alpine grey paint from the Manufaktur options list. This is paired with foiling on the sides that bear the AMG logo that is specially applied to create a colour gradient from grey to black, while red accents can be seen in the lower sections of the vehicle.

Beyond the fancy paintwork, the F1 Edition also comes with 21-inch AMG forged wheels in a five-twin-spoke design that is primarily finished in black, but with a red rim flange to match the colour scheme of the wheels fitted to the official medical car used in Formula 1. 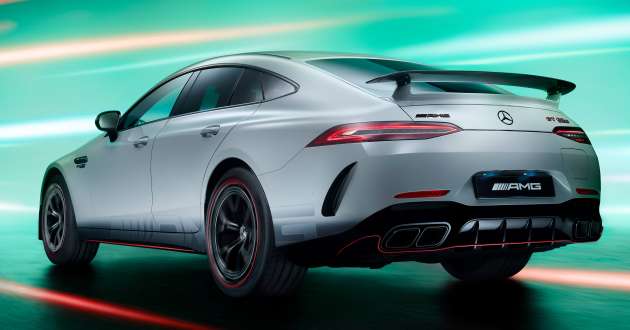 If that isn’t enough, both the AMG Night Package Exterior and AMG Night Package II come as standard for even more visual drama, with various components being finished in high-gloss black. These packages also introduce a trim strip in the rear apron, a darkened Panamericana grille as well as black chrome badges and tailpipe trims. Not visible always is the new fuel filler cap in silver chrome with AMG lettering. 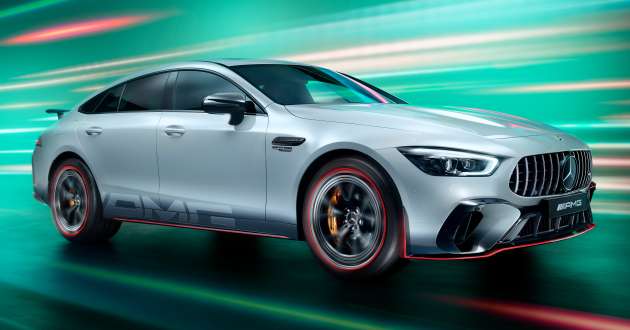 Mercedes-AMG is charging 23,800 euros (RM109,996) for all the F1 Edition goodies, which is a surcharge on top of the GT 63 S E Performance’s base price of nearly 200,000 euros (RM924,576). That’s quite a bit of dough, but the company will throw in a customised AMG indoor car cover with the F1 logo to make sure your expensive investment is protected from dust and scratches when parked.

Mechanically, the F1 Edition doesn’t differ much from the range-topping GT 4-Door Coupe variant and features the same M177 4.0 litre twin-turbo V8 making 639 PS and 900 Nm of torque. The E Performance system derived from the company’s F1 know-how adds a rear electric motor that contributes 204 PS (104 kW) and 320 Nm, while a belt-driven starter generator rated at 14 PS (10 kW) also pulls its weight for a total system output of 843 PS and 1,470 Nm.

With a nine-speed AMG Speedshift MCT 9G automatic gearbox and all-wheel drive, the big beast takes 2.9 seconds to get from 0-100 km/h and will hit a top speed of 316 km/h. A 6.1-kWh lithium-ion battery allows for silent, electric-only motoring for up to 12 km and can be charged via an AC input at a max of 3.7 kW.