Colorful snowsuits and sleeping-bag coats are selling like hot cakes during the pandemic’s difficult winter period. 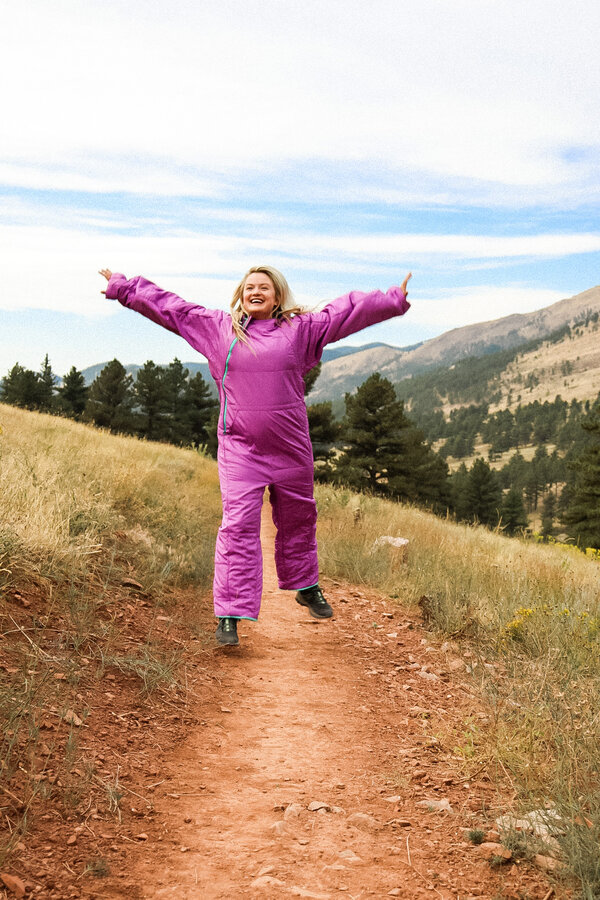 Back in December, when Giada Lubomirski met a friend for an outdoor drink, she would wear a winter coat and corduroys and be warm, especially under the outdoor heat lamps that have sprung up like mushrooms at New York City restaurants. Lately, not so much. “It’s starting to be really cold,” she said.

Social distancing is as important as ever, particularly with the emergence of new variants of the coronavirus. For many, winter weather is not a deterrent but rather an annoying condition to work around to be able to spend time with friends and family. Getting dressed to hang out, formerly frivolous and fun, can now require the thought once given to a ski trip or camping expedition.

Ms. Lubomirski, 41, an environmentalist, is sporting a “crazy-patterned” electric blue and white vintage snowsuit not just at Mohawk Mountain in Connecticut, when she has to stand around in the elements while her children snowboard, but at her country house in Mahopac, N.Y. “It’s very big. I love it even though it makes my head look very small,” she said. Made from “all plastic,” a material she normally avoids, “it’s like everything-proof,” she said. 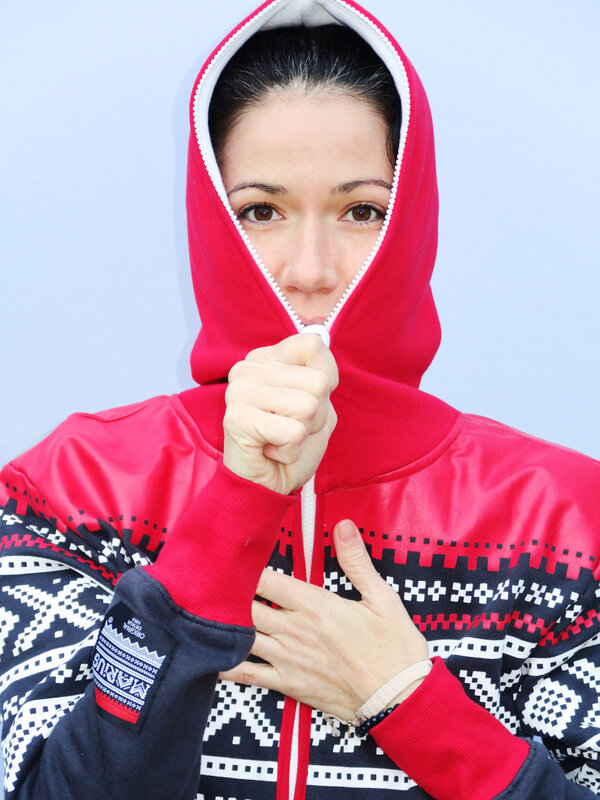 When in New York City, Ms. Lubomirski is more likely to don a one-piece with a Norwegian pattern on it, a gift from her husband nine years ago, the hood of which can be zipped in a way that covers her entire face. She also has a snug ’70s number found two decades ago at a thrift store while working as a stylist for Lenny Kravitz: “a very special salmon color, not a typical bright orange,” with an off-white corduroy collar (by Sportswear of Sweden but made in Finland). Both are toasty.

Also toasty? Wearing a sleeping bag — with legs. Perhaps this was the inspiration for the $2,700 bright green snowsuit Gucci just released as part of a collection with the North Face, the rugged outdoor gear brand, currently available at pop-up shops in Los Angeles and Brooklyn, and a few Gucci stores.

The idea also occurred to Emily Saunderson, 45, of Arlington, Mass., when she was trying to think of how to keep warm in her yard this winter (she has a heat lamp, but the town doesn’t permit fire pits). “Walkable sleeping bag,” she typed into her search engine, to disappointing results. But soon enough Ms. Saunderson was being stalked on Instagram by a brand called Selk’bag.

“I thought it was hilarious at first and then was like, This makes sense!” Hers is bright purple and was integrated into her Halloween costume (she carried a bottle of wine and wore a face shield with “#2020mom” emblazoned on it) and New Year’s Eve outfit (sweatpants underneath).

Though the Selk’bag is embarrassing to her children, Ms. Saunderson adores the freedom of movement and warmth it affords, like an outdoor Snuggie. “If you sit with a blanket, your back gets cold,” she said. “I wanted to be more contained. The only thing facing the elements is my face.”

Cristobal Murillo, 41, created the Selk’bag as a less-restrictive alternative to mummy-style sleeping bags in 2009 in Chile. He introduced the brand to the U.S. in 2013, where he found that customers were not just sleeping in the bags but wearing them. Mr. Murillo modified the bag accordingly, turning its attached feet into detachable bootees so shoes could be worn with it.

This winter, he said, sales have more than doubled from last, with “light” ($99) and original” ($169, for down to 25 degrees) models available. “We are seeing people ordering for the entire family to be socially distanced on the patio,” he said. A version with synthetic fill made from recycled plastic bottles sold out in a couple of days.

If wearing an actual sleeping bag is not enticing, there’s always Norma Kamali’s iconic sleeping-bag coat, presently on sale from her site in an effort to support local restaurants. “I never mark them down. I don’t have to,” Ms. Kamali said. “I can sell them full price next year if I don’t sell them this year, but I thought, ‘I will make them 50 percent off to have more access, so more people can dine outside.’” (Prices currently vary from $250-$1,110, according to length and pattern.)

She originally designed the coat in 1973 after a trip canoeing down the Delaware River and camping in Narrowsburg, N.Y. “In the middle of night, I put my sleeping bag over me when I had to go to the bathroom. I thought, ‘This needs some sleeves,’” Ms. Kamali said.

Her design, which involved sewing two coats together, draws from a NASA method for warmth. “There’s an air pocket between, so the heat from your body gets exchanged with the cold from outside in the pocket, and that’s how you stay warm,” said Ms. Kamali, who also suggested an extra pair of socks. “Find anything to put over you and go outside!”

Anything could include work gear — Carhartt coveralls preferred by construction crews or Aramark and Refrigiwear suits made for those who work in cold spaces for long periods of time. Or, if you ski, snowboard, or snowshoe, pull on your gear — from old pants lying around in the back of the closet to a bright white Verbier suit, the current best seller from My Sunday Ski, a British brand.

Sarah Crockett, the chief marketing officer of Backcountry.com, an outdoor apparel and equipment site, reported growth in all snow categories. “The one-piece business is up 59 percent year over year. People are trying to figure out how to stay warm and cozy,” she said, citing especially companies that offer colorful suits, including Airblaster and Picture Organic. “The brands we carry are built for a specific activity like backcountry riding and require technical features, but that doesn’t mean they’re not also great for sitting around having a socially distanced driveway visit.”

(If you’re wondering how to pee while wearing a snowsuit, Ms. Crockett said her own Burton bib has a “system that allows you not to disrobe,” which sounds a lot like old-school Dr. Denton pajamas. Unfortunately not all brands have similarly prioritized technical performance — yet. “We are working on a bathroom solution,” said Mr. Murillo of Selk’bag.)

But even in a snowsuit cold can creep in — remember childhood sledding? Ms. Lubomirski feels it in her toes. “I only wear used shoes. I have been wearing my ’90s L.L. Bean boots and freezing,” she said.

The answer to staying warm when not moving around is what’s under the snowsuits.

Ms. Crockett, who lives in Park City, Utah, has “personal expertise in staying warm” and is passionate about the art of layering. For down-to-your-toes comfort, she likes a thick base layer (fleece or wool). For very cold weather, an insulator, like a thin down jacket, is useful. Thin layers won’t restrict movement. “You’re not walking around like the kid from ‘Christmas Story,”’ she promised.

Do not underestimate headwear. Ms. Crockett is a fan of hoods; they cover ears fully, as well as protect the neck. For a game changer, toss hand and foot warmers into gloves and boots. “That’s the cherry on top,” she said.

Tatyanna Wright, 46, an Australian podcast host currently living in Peru, Vt., is equally serious about base layers — wool tank tops, mid-layers and socks in all weights and lengths — after years of skiing all over the world. Nowadays, she’s layering constantly to stand outside for hours watching her kids’ race teams. But you won’t find Ms. Wright in a snowsuit. She likes to match her gear to the activity and finds ski wear too restrictive for daily use.

If serving hot beverages — Glühwein for the adults, cider for the kids — by an outdoor fire, she prefers something that looks like a down track suit, separates from Montbell. “I discovered them in Boulder. I was so sick of being cold outside,” she said. Her husband initially teased her, saying she looked like the Michelin Man. “I don’t care! I’m the warmest person here,” she said. On icy days, the pieces easily fit under a larger coat.

But Ms. Wright’s most prized cold-weather item is sheepskin. Her family sits on them outside in the snow, and she tucks Ugg sheepskin liners into her boots. “Cold transfers eventually through boots,” she said. “But sheepskin with a leather base is an amazing barrier. It keeps your feet really warm. My philosophy is, ‘Why be cold?’”

Ms. Kamali, who doesn’t like cold weather, agrees, but also notes there’s something deeper than performance gear needed to get us collectively through this pandemic winter.

“It’s more than keeping warm. There is something about the cocooning effect we all need now. We need to be hugged by something and we aren’t allowed to hug,” she said. “Let the coat hug you. The coat is there for you unconditionally.”