You know something has changed when the biggest celebrity at a fashion show is not Gina Gershon or Nicky Hilton or “Riverdale’s” Madelaine Petsch but Kathy Hochul, the new governor of New York.

Yet on Wednesday, as the first New York Fashion Week since February 2020 began and Ms. Hochul took her place front row at Prabal Gurung’s show in Robert F. Wagner Jr. Park on the tip of Battery Park, with the lights of 9/11 stretching into the sky just behind, she was mobbed by a stream of selfie-happy attendees.

Andrew Cuomo never showed up at a fashion show (at least not that anyone could recall). Neither did Mayor Bill de Blasio (wrong signal for someone with a socialist bent). So Ms. Hochul’s presence seemed to serve as a sign — if any were needed — that we’re on the verge of a new era. 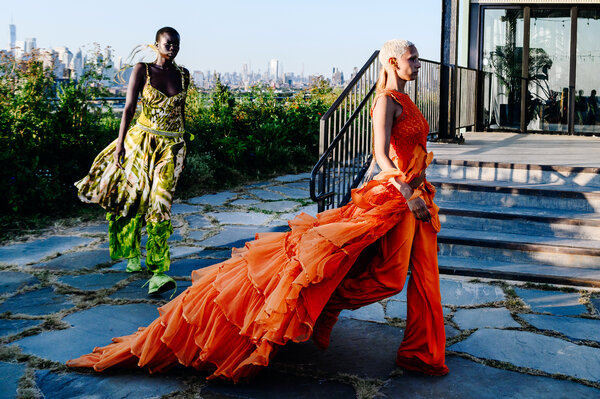 Shows are back. The audience in most of its gaudy plumage has returned: street style peacocks in fuchsia sequins stalking the sidewalks in midafternoon; slipstreaming past in thin squiggles of knits; borne through the city in the hushed environs of the black Town Car and then disgorged from the quiet dimness in a clacking herd — despite the fact the footwear of choice is now a fashion Birkenstock or a sneaker.

Shows, when possible are being staged in the open air. The city itself has a starring role: the skyline acting as the backdrop for Peter Do’s debut show, held at a drive-in in Greenpoint; the verdant hillocks of Little Island and rolling waves of the Hudson River framing Proenza Schouler’s looks; the scrappy concrete of the East Village acting as a runway to Imitation of Christ’s performance piece in St. Mark’s Church.

The general vibe is joy at the chance to be in-person again, with an undertone of inchoate unease. A lot of the crowd is masked, but a lot of it isn’t (usually the celebrity lot). This makes face coverings seem weirdly like an accessory, rather than a crucial safety measure.

Everything feels eerily familiar, but also, as Diane von Furstenberg (who is not having a show) said, “very different.” It’s easy to scratch your head and wonder why a fashion show matters. Yet after 20 months of isolation and dressing largely for the kitchen table, this is now, perhaps more than ever in recent memory, a time when the question of what to wear next has real currency.

So what’s the answer?

“You dress for the mess,” Hillary Taymour of Collina Strada wrote in her show notes. Then, amid the scallions and sunflowers of the Brooklyn Grange, the largest rooftop garden in New York, she sent out an exuberant riot of overdyed pastels and oversize cargo pants and upcycled materials, pannier-padded tank dresses and beetle-shaped breastplates, all layered willy-nilly on running, skipping, hand-holding friends of a variety of ages and affinities. These were clothes that wore their sustainability lightly and their sense of community on their sleeve. It was impossible not to smile.

Tara Subkoff of Imitation of Christ, on the other hand, put it more baldly, in a show that involved a Buddhist monk, a live performance from a 19-year-old singer named Blessing, and 78 dancers and circus performers writhing and flowing in unison, some of them sporting a group of casual separates printed with the message “the more you consume the less you have.”

That might seem like high irony (or idiocy) coming from someone who sells stuff, but these pieces, which were created in collaboration with two young Los Angeles designers, Asia Caldera and Daisy Bourez, were all either upcycled or made from deadstock. And after the sweats and tees came a whole collection of sparkling, satiny kitchen table couture — the sort that lets you have your scruples and style too. Not exactly for the office, but definitely for stepping out.

Which is also what Jack McCollough and Lazaro Hernandez were thinking about in their Proenza Schouler show. “It’s a celebration of a newfound freedom that feels slightly fragile still,” Mr. McCollough said backstage (or side stage; the zoo-like scene that is backstage being mostly closed now because of safety protocols).

That meant lots of jersey in the form of cropped trousers that curved just a bit from thigh to calf to leave room around the legs, slope-shoulder jackets and fluid trench coats. It meant tunics with a whiff of the New Look and elbow-length sleeves dangling jet bead fringe. It meant long, lean high-neck dresses with four tiers of fringe at the skirt, or lozenge-shaped cutouts at the torso snaking ameoba-like over a shoulder or around the waist. It meant traffic light tones and block tropical prints. Nothing looked too constricting or complicated.

The result was an effective bridge between where we’ve been (swaddled and scared) and where we might be — hopefully — going. As was Mr. Do’s elegant meditation on the shirtdress as a crucial component of the four-part suit: stretched to the ankle, fluttering mostly undone over louche trousers or shorts and beneath rigorously tailored jackets, sometimes embroidered with a single rose, sometimes with a window cut out at the back like an escape hatch, layered in all meanings of that word.

It didn’t try too hard, unlike Mr. Gurung’s ode to the American woman. The designer made waves a few seasons ago with a show that posed the question: “Who gets to be an American?” It was a query that produced one of the featured pieces in the coming Costume Institute show at the Met. Now he seems to have moved on to a related theme that can be summed up as: “What does it mean to be an American woman?”

That’s an important question, and Mr. Gurung, who is also collaborating with Mattel on its American Girl line of dolls and who has long been a champion of inclusivity of all kinds — racial, size, gender — embraced it. The problem is his political stance seems to have seeped into his design approach, and when it comes to dressing the American woman, whoever so identifies, he’s including everything but the kitchen sink.

Picnic gingham! Cowboy plaid! Floral lawn! Shirtdresses! Baby dolls! Bloomers and strapless feather cocktail frocks! It was all in there, like a grab bag of femininity from many eras, all the way back to 18th-century panniers, here inserted on the sides of … crisp black jackets?

Choice is a key value these days, but watching Ms. Hochul, gamely applauding, it was hard to imagine what, in the stew of ideas, she would pick up on to define the new look of Albany.