When 91-year-old Sam Gallo and 86-year-old Millie Hathorn got engaged in March 2020, Mr. Gallo, who is deaf from his time as crew chief on jet planes during the Korean War, wrote a letter to his three children. “Only at death is love done,” he wrote. While they both had been married before, he wrote, “love was not done … with us.”

The purpose of the letter was to explain why they wanted to get married at their ages and so quickly, instead of waiting until the pandemic had passed and the families could celebrate together. “What a tragedy it would be to allow a day once earned in gold to fall like water through careless fingers … We accept our golden days are numbered, and we are determined to treasure each one as they are given to us, one by one.” 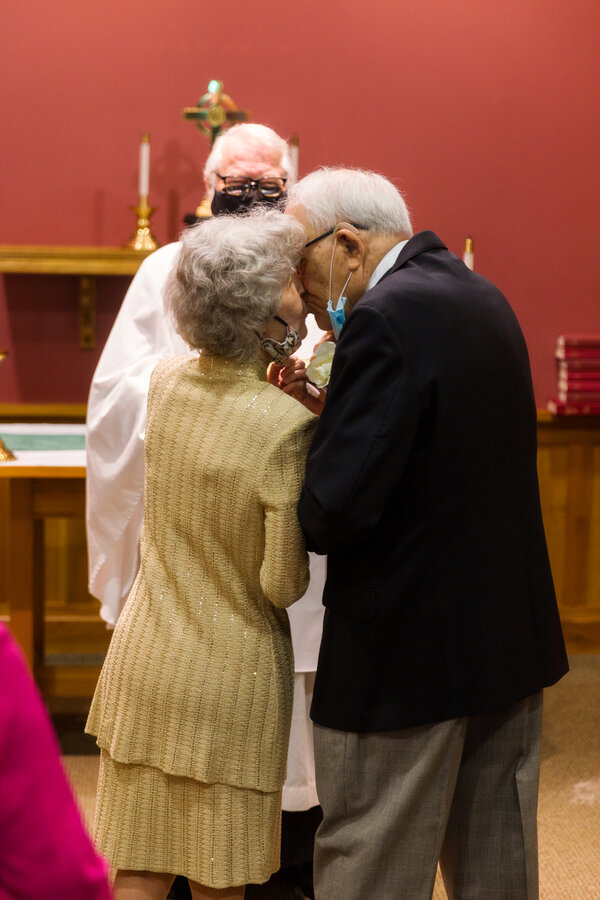 The Gallos, who use the Ava app to communicate, met and live together at St. James Place, a continuing care retirement community in Baton Rouge, La. Their relationship took a romantic turn in February 2020. They got engaged right after the coronavirus hit the United States, and their love blossomed even amid the pandemic.

Companionship is often found in long-term care facilities. Research published in the Sexuality Research and Social Policy in 2009 found that it was “common” for assisted living residents to have a “continued interest in romantic relationships.” And while intercourse isn’t unheard-of in assisted living, the findings “overwhelmingly revealed that intimate touch, hand holding, and other less physically intense expressions were common.”

But many of these types of facilities have been on lockdowns of late to avoid infection of the coronavirus. At points, residents have been quarantined in their rooms or on their floors. And in some places visitations have been restricted (the Centers for Disease Control advised long-term care facilities to “have a plan for visitor restrictions” and “facilitate and encourage alternative methods for visitation” like video calls).

Senior care housing facilities can be lonely, and with these restrictions, many have feared residents are lonelier than ever.

Some say the opposite is happening though. Some residents may be more inclined to find a romantic companion right now, whether because of the doom and gloom of the pandemic or because of the isolation from friends and family.

“We are seeing more relationship building, some romantic, some friendship,” said Daniel Reingold, president and chief executive of the Hebrew Home at Riverdale in the Bronx said. He said “without question” his residents, who are in the process of getting fully vaccinated, have been more open to love during the pandemic. “What I’m sensing is not that there’s an increased fear of mortality so much that there’s an increased appreciation for love,” he said. “People realizing, I want to have somebody in my life right now. So they’re finding each other.”

For the Gallos, they found each other before the coronavirus hit, but it wasn’t until February 2020 when they spent time together at St. James’s Mardi Gras party that things changed. “After that party, it was as if it had to be that we were together,” said Ms. Gallo, who took her husband’s name. Also after that party, the pandemic hit. But that didn’t stop them from getting to know each other. In fact, it may have helped. Throughout the past year, as restrictions have kept people apart, limited activities and closed cafeterias, they’ve spent as much time together as possible. “We made sure we could spend the same amount of time together and didn’t hide it from anybody, we held hands and sat close to each other, but we did wear masks,” she said.

“We decided because of our age and how we felt, we would get married soon here at St. James, by their chaplain,” Ms. Gallo said. “We couldn’t have family but we had one resident who was my maid of honor and one resident who was his best man. Of course we had all the social distancing and masks. But it worked out beautifully. It was a beautiful day, we had no problems.”

Their children (six total) were disappointed they couldn’t attend the nuptials, but Ms. Gallo said, “they understood that we didn’t want to wait.”

The Gallos contracted Covid-19 in December, “it was mild and we both came out of it really good,” she said. “He took care of me when I needed help, I took care of him when he needed help. There wasn’t a moment I wasn’t right there for him, and he was always there for me.” Ms. Gallo said attitude is key to surviving quarantine, and it’s clear in the way she looks at her experience. “I think it did bring us closer together.”

Now, she said, “there’s no doubt that being with Sam has definitely made the lockdowns and all not so bad.”

At Hebrew Home, Gloria Duncan and Al Cappiello, both 71, who’ve been together for about four years, said the pandemic and quarantining has changed their relationship “for the better.” But keeping their love alive over the course of multiple quarantines has been a challenge. Luckily, it was one the two of them were more than up for.

They have been quarantined separately two or three times over the past year; the longest they went without seeing each other was an unpleasant 14 days. During those times, they would talk on the phone. Other than that, they see each other every day.

“During Covid, she looks after me, I look after her. It’s brought us a lot closer. It’s really a blessing,” Mr. Cappiello said. He doesn’t have any family and Ms. Duncan’s family lives out of state. “It’s been easier having each other during this time,” she added.

They both believe this experience has been a positive one for their relationship, “because we have not been able to see other people, we treasure each other even more,” Ms. Duncan said.

Administrators from all the facilities interviewed for this article have seen a lot of residents stepping up to take care of and support each other in isolation. That includes Amber Court, an assisted living community in Brooklyn, where 76-year-old Jeffrey Miller proposed to 71-year-old Gloria Alexis in August.

Before the pandemic, they weren’t even in a romantic relationship. They were just friends. However, after the pandemic hit, Ms. Alexis spent a month in the hospital (for something unrelated to coronavirus, which neither of them have contracted), cut off from Mr. Miller for “too long,” he said. “I was going crazy.” During that time, Mr. Miller said his feelings for her grew stronger.

Sol Bauer, the director of operations at Amber Court, said that the uncertainty of the world around them made Mr. Miller realize he cared for her as more than a friend. “Jeffrey kept on coming in and bothering me and kept asking all of us in the office when she’s coming back,” Mr. Bauer said. “And I eventually said, ‘why do you need to know when she’s coming back? When she’s back, you’ll know.’ And he said, ‘I want to propose to her,’ and he whipped out a box with a diamond ring and a wedding band, and we almost passed out.”

Once they found out when she’d be coming back, the staff helped Mr. Miller plan a perfect outdoor proposal, complete with balloons, roses, and, of course, the ring. “Something told me to do it, it was about time. We’re not getting any younger,” Mr. Miller said.

They are hoping for a spring wedding at Amber Court with friends from the facility. They now live in the same room. As to why the pandemic changed their relationship, Mr. Miller said, “you realize, you don’t want to be by yourself.”

And it’s not just the coupled up residents who are benefiting from these budding romances amid a worldwide pandemic.

Ms. Gallo said, “I feel like here at St. James, we brought a little touch of love and joy to some of the people. We always hold hands when we walk out, and people stop us and say, ‘We love seeing ya’ll, ya’ll make me feel good.’ I think we brought some kind of comfort to some people. I feel we did some good.”