Alexandra Levy Olsman and Zachary Isaac Frankel lived across Rittenhouse Square from each other at a young age and went to the same Montessori preschool in Philadelphia. But, when a mutual friend introduced them in October 2016, they had no memory of ever meeting.

Mr. Frankel said the mutual friend, Lauren Jacobs, had reached out to him to say, “I have this girl for you.”

That woman was Ms. Olsman, an associate specialist then in the antiquities department at Christie’s New York. Ms. Olsman was part of an art gallery panel discussion about collecting art, which Ms. Jacobs was attending. The event, in Philadelphia, was where Ms. Jacobs had the inspiration to match the two. After the talk, and over wine and cheese, she mentioned her idea to Ms. Olsman about meeting Mr. Frankel. Minutes later he called Ms. Jacobs, who handed the phone over to Ms. Olsman, and they chatted.

The next week, while Ms. Olsman was in England at Christie’s London, he texted her about meeting in New York when she got back.

Ms. Olsman, jet-lagged, met him Friday evening at a rooftop restaurant at Eataly NYC Flatiron, an Italian food market in New York, but their Philadelphia connections still took off over a grilled octopus appetizer, dinner and two bottles of red wine.

“I was floating,” she said. “I knew I had met someone special.”

He walked her home across Madison Square Park, and as they sat on a bench they had their first kiss.

They met again Sunday for dinner at the Clocktower restaurant on her side of the park, and soon they went museum and gallery-hopping in New York and Philadelphia.

In January 2017, while her parents packed for a move to San Miguel de Allende, Mexico, her mother came across potential proof of them together decades earlier — a photo from a preschool class at Greene Towne Montessori School in Philadelphia. She was 3 and he 5. 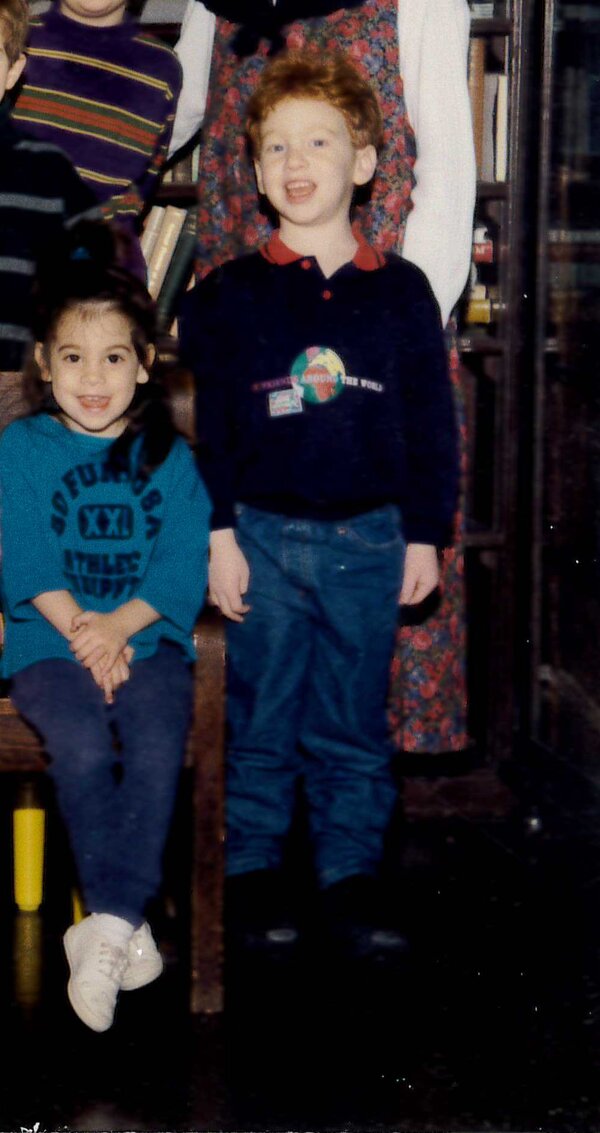 “There’s a redhead standing next to you, could that be Zach?” she recalled her mother texted.

Mr. Frankel confirmed it most certainly was him.

“It’s now a magnet on the fridge,” he said, and Ms. Olsman, who resisted posting it on Instagram at the time, had quietly decided it would make a great save the date card if they ever got married.

In February 2018, she moved into his West Village apartment, and he proposed Thanksgiving weekend 2019 at their favorite spot — the Brodsky Gallery, near Brancusi’s “The Kiss” sculpture, at the Philadelphia Museum of Art.

In March 2020 Ms. Olsman packed a bag to stay in Philadelphia with him a couple of weeks, but after a few months they decided to move there.

“We’re happy to be home,” she said, and they planned a Jewish ceremony in San Miguel de Allende, Mexico for February 2020, but in the face of the coronavirus pandemic postponed it until fall.

On Dec. 27, Marni Rosenthal Chaikin, ordained by American Marriage Ministries, and a cousin of the bride, officiated at Pacifica Senior Living Forest Trace in Lauderhill, Fla., where their maternal grandfather, Bernie Levy, lives. It was also his 100th birthday and the reason they picked the date and place. The groom’s parents were there, while the bride’s parents watched via Zoom. They celebrated with Mr. Levy’s favorite foods — deli sandwiches and oysters.