Early into the pandemic, Helen Kim and Peter Moon had to delay their wedding to keep their small Chicago coffee shop afloat. They became as ‘essential’ to their neighborhood as it was to them. 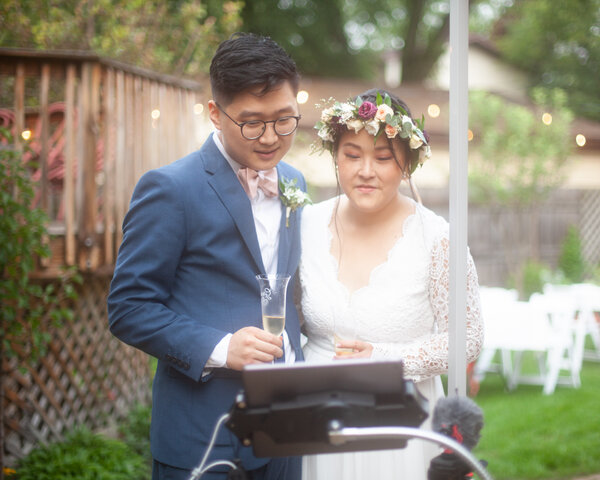 When Peter Moon saw Helen Kim’s profile on the dating app Hinge on Jan. 8, 2019, he swiped right immediately. The answer she had provided to an app-generated question about the one word her mother might use to describe her — “disobedient” — had stopped him cold.

“That was the thing that got me, other than that she looked cute,” Mr. Moon said. “In the Korean Christian community, everyone’s obedient. No one wants to cause any trouble.”

The early months of the coronavirus would find him associating a different word with Ms. Kim: determined. He would learn to think of himself in a new way, too. Instead of just rebellious, he was game.

Mr. Moon and Ms. Kim, both 29, are the owners of Coffee Lab & Roasters, a coffee shop in Chicago’s Lake View neighborhood. Before March, Mr. Moon had little experience with the slow-drip cold brew they call their specialty. Coffee had been Ms. Kim’s passion. She bought the shop in May 2019. But as the pandemic started sending small businesses into a death spiral in the spring and, one by one, her employees no longer felt safe coming to work, Mr. Moon tied on a barista’s apron to fill in. By August, the couple had narrowly escaped financial ruin. They had also established themselves as a backbone of their community, rallying to support causes that kept it from unraveling.

Mr. Moon and Ms. Kim met for a first date the day after they matched on Hinge. At Luella’s Southern Kitchen, in Chicago’s Lincoln Square, they sailed past topics other couples might have bonded over, like being native Chicagoans and their traditional Korean families. Both were navigating a period of self-discovery personally and professionally that compelled them to look beyond obvious similarities. For Mr. Moon, total transparency was essential.

“I wanted to make sure I wasn’t hiding anything from her,” he said. “So I was like, OK, I have to tell her this because it matters.” Ms. Kim had liked his profile picture because it showed him with a cat. “It’s very rare to come across a Korean man who likes cats,” she said. Before she had a chance to ask about the cat, though, he revealed that he was giving it back to his former fiancée. “I explained that I was in a four-year relationship that ended the previous summer,” he said, “and that the cat that was in my dating profile photo was from my previous relationship, when I had a cat and two dogs.”

Ms. Kim was less disappointed than intrigued. “He basically sat down and said, ‘This is me, take it or leave it,’” she said. “Neither of us was in a place in our lives where we were interested in playing games. Him telling me stuff from the start was really refreshing.”

She knew some of the stuff wouldn’t sit well with her family. Ms. Kim grew up attending what she called a diverse nondenominational church in the Chicago area. Mr. Moon’s family is devoutly Presbyterian. But about a decade ago, his faith started wavering.