Most of the world’s airlines could be bankrupt by the end of May without help from the government and industry, according to a major aviation consultancy.

The warning comes from CAPA Centre for Aviation, an airline analysis and consulting firm based in Australia, as airlines worldwide cut schedules and staff due to the COVID-19 pandemic.

“Demand is drying up in ways that are completely unprecedented,” CAPA said in a report. “Normality is not yet on the horizon.” Many countries have closed borders to arrivals or have announced compulsory self-isolation, leading to a sharp fall in demand for air travel.

The US has banned all flights from Europe, including the UK, while countries including Israel, Australia and New Zealand have said all arrivals will have to spend 14 days in isolation on arrival.

On Monday morning, easyJet said it would continue to operate rescue flights for short periods “where we can” to repatriate passengers; however, it would also be cutting operations further.

“These actions will continue on a rolling basis for the foreseeable future and could result in the grounding of the majority of the easyJet fleet,” the airline said in a statement.

Chief executive Johan Lundgren added: “At easyJet we are doing everything in our power to rise to the challenges of the coronavirus so that we can continue to provide the benefits that aviation brings to people, the economy and business.

“European aviation faces a precarious future and it is clear that coordinated government backing will be required to ensure the industry survives and is able to continue to operate when the crisis is over.”

On Sunday, Sky News reported that Britain’s airline industry needs emergency government support worth up to £7.5bn to avert a catastrophe that would wipe out tens of thousands of jobs.

Peter Norris, the chairman of Virgin Atlantic Airways’ majority shareholder, Virgin Group, will write to the prime minister today to warn that the sector needs immediate financial aid to survive.

British Airways owner IAG said on Monday that the outbreak and associated travel restrictions were “having a significant and increasingly negative impact” on demand on almost all of its routes.

It said capacity is expected to be reduced by 75% in April and May compared to the same period last year.

Willie Walsh, IAG’s chief executive, said: “We have seen a substantial decline in bookings across our airlines and global network over the past few weeks and we expect demand to remain weak until well into the summer. We are therefore making significant reductions to our flying schedules.

“We will continue to monitor demand levels and we have the flexibility to make further cuts if necessary. We are also taking actions to reduce operating expenses and improve cash flow at each of our airlines. IAG is resilient with a strong balance sheet and substantial cash liquidity.”

He added: “We know aviation is at the forefront in many ways…but we want to make sure companies and individuals, organisations in a good state are able to continue so we’ll be looking at all these measures, I’ll be discussing them with the chancellor and the prime minister later today.” 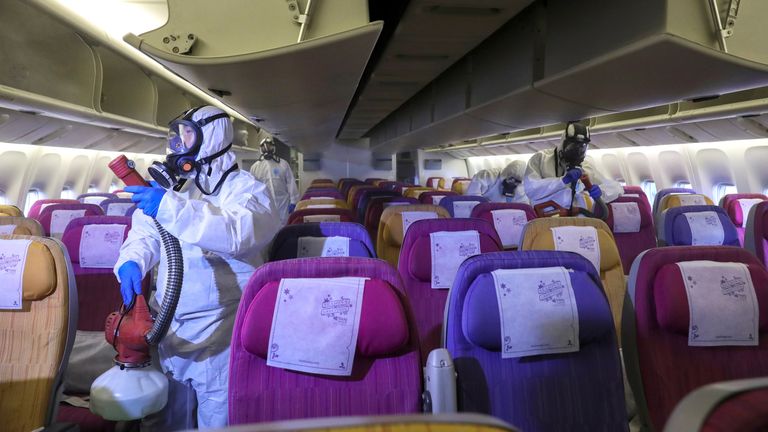 In the US, United Airlines said it will cut capacity by 50% in April and May as it announced that March brought $1.5bn (£1.2bn) less revenue than the same time last year.

The airline warned that many of its planes could be flying empty well into the summer months, despite the cuts.

It will also cut corporate salaries by half, with chief executive Oscar Munoz saying: “This crisis is moving really quickly”.

Sara Nelson, president of the Association of Flight Attendants-CWA, which represents 50,000 US flight attendants, called on Congress to “take all measures available to protect the health and payroll of American workers”. 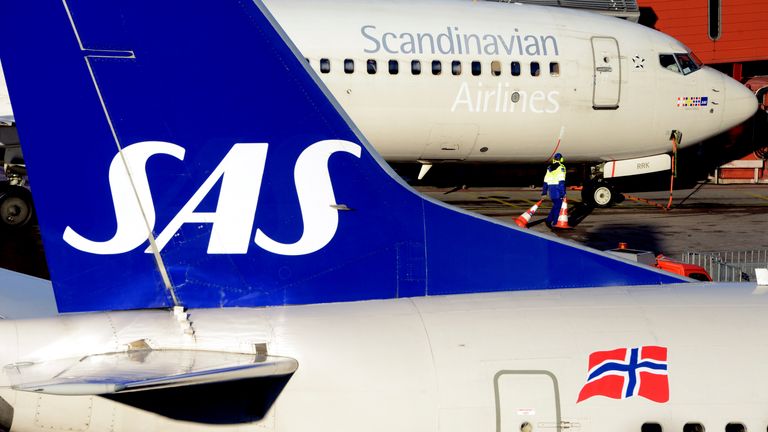 Germany’s Tui AG and Scandinavian airline SAS will suspend most operations and apply for government help to survive the outbreak’s effects.

Icelandair Group says it will cut capacity and reduce its salary cost “significantly” and Air New Zealand said there would be job losses as it cuts long haul capacity by 85% over the coming months.

Air New Zealand’s chief executive Greg Foran said: “We are accepting that for the coming months at least, Air New Zealand will be a smaller airline requiring fewer resources, including fewer people.”

The World Travel and Tourism Council last week warned that up to 50 million jobs globally were at risk in the sector due to the COVID-19 pandemic.