Founding two giant companies, he helped turn his country into an economic giant while encouraging employees to approach work with an almost spiritual devotion. 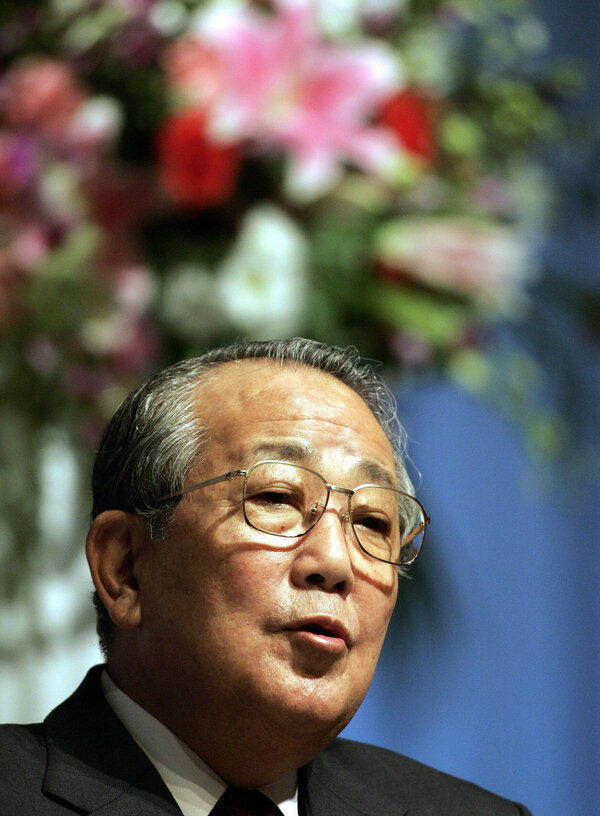 TOKYO — Kazuo Inamori, one of the great Japanese industrialists of the postwar generation, who founded two multibillion-dollar companies and pulled another back from the brink of bankruptcy, died on Aug. 24 in Kyoto, Japan. He was 90.

His death was confirmed in a statement by Kyocera, the fine ceramics and electronics giant he founded in Kyoto in 1959.

Mr. Inamori, who was known in Japan as the “God of Management,” made the workplace into a site of near spiritual devotion, preaching a corporate ethos that he put ahead of pure profit motive.

His record of business success has few equals in the history of corporate Japan, where he is often cited as one of a triumvirate of business founders — along with Sony’s Akio Morita and Honda’s Soichiro Honda — who spearheaded the country’s growth into an economic powerhouse in the decades after World War II.

Although Mr. Inamori was lesser known abroad than his contemporaries, his management style, which drew from Japanese spiritual traditions, inspired generations of Japanese workers to give a monastic level of devotion to their companies.

He was best know for what he called “amoeba management” — a philosophy that advocated splitting a company’s operations into small groups and leaving business decisions to the people who understood them best: the employees. Like an amoeba, the units would change shape and even split as business demands required.

Mr. Inamori expounded on his theories in management books and spread them globally through a network of leadership academies that trained thousands of corporate executives. His teachings found a particularly ready audience in China, where his books reportedly sold millions of copies, and he has been cited by the likes of Jack Ma, co-founder of the Chinese e-commerce conglomerate Alibaba.

After ushering Kyocera into the pantheon of Japan’s corporate giants, Mr. Inamori founded a second company, known today as KDDI, which became the country’s second largest telecommunications provider, after NTT, a state-owned company that was privatized in the 1980s.

In 1997, he retired to pursue a life of devotion as a Buddhist monk, but was pulled back into the corporate world in 2010, at the age of 77, when Japan’s government tapped him to turn around the failing nationally-operated Japan Airlines.

Kazuo Inamori was born on Jan. 30, 1932, in Kagoshima, a seaside city on Japan’s Kyushu Island, the second of seven children of Keiichi and Kimi Inamori. As the story is told in Japan, when Kazuo was a child, his father’s printing shop was firebombed in the last days of World War II. When the boy, at 13, was bedridden with tuberculosis, a neighbor lent him a book that sparked his interest in religion.

After earning a chemical engineering degree from Kagoshima University, Mr. Inamori joined a small ceramics company in Kyoto as a researcher, but left to begin his own concern after a disagreement with management. He started the business with just $10,000, armed with his own formula for a material to make ceramic insulators for televisions. He soon had his employees swear a blood oath that they would “work for the benefit of the world’s people,” he recounted in the book “From Zero to Kyocera: A Company Philosophy to Grow People and Organizations” (2020).

The business, then called Kyoto Ceramic Company, got its first big break when it received an order to make resistor rods for the Apollo space program. It went on to become one of the world’s top suppliers of high-tech ceramics, making everything from razor sharp knives to casings for Intel computer chips and expanding into other products, including solar panels and mobile phones.

While the business never made Kyocera a household name outside of Japan, it did make Mr. Inamori fabulously wealthy and brought him a level of prestige and influence in his country that few could equal.

In 1984, after Japan ended the government monopoly on the telecommunications industry, he founded a second firm, DDI, a long-distance carrier that quickly broke the market dominance of formerly state-owned NTT.

Around the same time, reaching beyond the world of industry, Mr. Inamori devoted more than $80 million to establishing the Kyoto Prize, an award recognizing the most important advancement in the sciences, arts, technology and philosophy.

He set the award amount lower than that of the Nobel Prize, but he did not hide his broader ambitions for the prize, noting at the time that “nothing would be more gratifying than if it provided some small impetus for the construction of a new philosophical paradigm.”

After retiring as chairman of his two companies, Mr. Inamori pursued his philosophical interests, withdrawing to a Buddhist monastery in Kyoto, where he lived a monk’s life, shaving his head, waking early to meditate and keeping a vegetarian diet.

But the pull of the material world was too strong for him to resist. In 2010, the Japanese government recruited him to save JAL as the airline filed for bankruptcy. With no experience in the airline industry and no salary, Mr. Inamori turned the company around in less than three years through a combination of improvements in efficiency and services and by cutting 16,000 jobs.

His survivors include his wife, Asako, and a daughter, Shinobu Kanazawa.

Mr. Inamori — who coined Kyocera’s motto, “respect the divine and love people” — was known as a taskmaster who demanded perfection from his employees, and his reputation sometimes made it difficult for Kyocera to find new hires.

In fostering what some saw as a cultlike devotion among his employees, for many years he required them to start every workday by reading and discussing a passage from a little blue book of his collected teachings.

While he had a reputation for modesty, he also had an unapologetic faith in his way of working, telling Tokyo Journal in 2015: “I have seen no changes in my management philosophy for 56 years. My philosophy and ethics are like a faith and have never fluctuated.”

In the introduction to “From Zero to Kyocera,” he said that his writings contain “‘the formula for success’ and can serve as a bible both for business management and life.”

“Without this sort of spiritual background, I don’t think Kyocera would be as successful as it is today,” Mr. Inamori told The New York Times in 1997, asserting that he always privileged ethics in his business decisions.

The approach, he believed, was fundamentally different from that of European and American companies. They “think only about whether they can make a profit,” he said, adding “so now I think capitalism there is on the decline.”

Years later he summed up his philosophy for reversing that decline: “When I encounter a dead end in my business or personal life, or find myself deeply troubled, I immediately go back to this starting point: doing what is right as a human being.”