Ever since Volkswagen was caught five years ago using illegal software to conceal the fact that its “clean diesels” were actually rolling pollution machines, the company has insisted that the wrongdoing was the work of lower-level employees. Managers at the very top were clueless, Volkswagen’s lawyers have said.

On Wednesday, prosecutors in Munich will challenge that assertion in court for the first time. They will begin presenting evidence in the trial of Rupert Stadler, a former chief executive of Volkswagen’s Audi luxury car division. As a member of Volkswagen’s management board, he belonged to the top echelon.

The trial is the first in Germany stemming from the scandal, the culmination of an exhaustive investigation involving hundreds of witnesses and millions of documents. But the case will also test whether prosecutors can overcome the difficulties inherent in trying to convict top managers protected by layers of underlings. That is a problem that has also frustrated investigators in the United States when prosecuting corporate crime.

Mr. Stadler faces charges of fraud and false advertising stemming from accusations that Audi continued to sell diesel cars with illegal software even after U.S. authorities uncovered the cheating in 2015. Volkswagen, Audi and Porsche cars were programmed to meet air-quality standards while being tested, but they spewed copious amounts of diesel fumes in regular driving.

Mr. Stadler and three co-defendants, including Wolfgang Hatz, a former head of engine development at Audi, will be the first of dozens of former employees of Volkswagen to face trial in Germany in connection with the scandal. 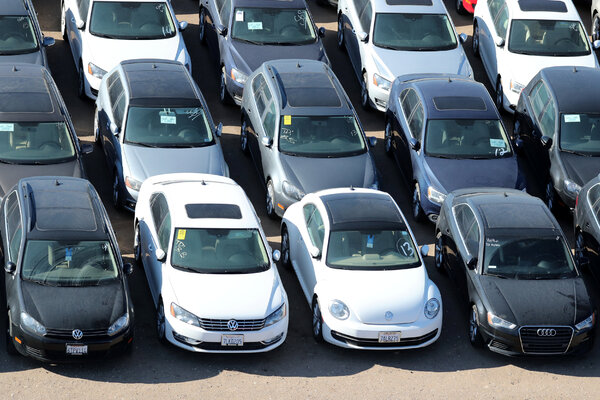 Mr. Stadler, who could get five years in prison if convicted, is the second-highest-ranking manager to face charges after Martin Winterkorn, a former Volkswagen chief executive, whose trial is expected next year. Mr. Stadler, Mr. Winterkorn and Mr. Hatz have denied wrongdoing.

The panel of judges in the case will hear evidence in a high-security Munich courtroom once used to try terrorists; it was chosen because it is large enough to allow social distancing. The court has scheduled more than 180 days of testimony and legal arguments lasting until the end of 2022, an indication of the complexity of the case.

Even when the corporate wrongdoing is extensive it is often difficult to prove criminal culpability among top management. There is rarely a paper trail, and executives point fingers at one another to deflect blame. Middle managers usually wind up taking the fall, or top executives walk away with civil penalties, as has often been the case with bankers accused of cheating their customers. Serious jail time is rare.

Probably for that reason, German prosecutors are focusing on Mr. Stadler’s actions after the American Environmental Protection Agency formally accused Volkswagen of emissions violations in September 2015, when he could no longer plausibly maintain that he was unaware of the cheating.

Even though Volkswagen admitted wrongdoing, Audi claimed that its diesels were legal and continued to sell them in Europe for two more years. But those cars also proved to be fitted with illegal software.

Mr. Stadler, 57, has already spent four and a half months in pretrial detention, which can be imposed if there is evidence the defendant intends to flee or interfere with the investigation.

Audi has paid a fine of 800 million euros, or $930 million, for violations of German law and is not a defendant in the trial. But the testimony will focus renewed attention on the division, Volkswagen’s cash cow, and its prominent role in the genesis of the fraud.

Audi said in a statement that it was glad that the facts of the case would be determined by a court of law. “Audi has become a different company since the diesel crisis became known,” the company said. The company has not taken a position on the charges faced by its former chief executive.

Audi engineers invented the cheating software and exported it to the rest of Volkswagen, according to internal company documents previously reported by The New York Times and other news organizations.

In the early 2000s, engineers at Audi found that technology needed to make diesel models compliant with emissions standards caused the engine to run noisily when it was warming up. That would bother Audi’s affluent customers, executives thought.

So the Audi engineers devised software that could recognize when a car was undergoing an official emissions test, using parameters such as the amount of pressure on the gas pedal. Under test conditions the software, known as the “acoustic function,” optimized the emissions controls to make the car temporarily compliant. At other times the software reduced the controls to minimize noise — producing illegal amounts of poisonous nitrogen oxides as a result.

Audi employees and managers were well aware that what they were doing was illegal, according to emails and other documents seen by The Times.

“We won’t make it without a few dirty tricks,” an employee in Audi’s diesel motor development department wrote in an email to colleagues in January 2008. Audi managers and engineers bluntly discussed what was in effect a criminal conspiracy, using terms like “defeat device” or “cycle beating” that clearly connote illegal attempts to thwart regulators’ tests.

In 2006 Volkswagen engineers adapted the acoustic function software when they ran into problems developing a new diesel engine that could meet emissions standards in the United States, where the company planned a major “clean diesel” marketing campaign. The cars could not deliver on the clean diesel promise without causing excessive wear and tear on the engine.

Volkswagen engineers, with the help of the supplier Robert Bosch, refined the software developed by Audi to recognize the distinctive driving pattern that U.S. regulators used when conducting emissions spot checks. Only then were the pollution controls fully deployed. Volkswagen sold almost 600,000 cars in the United States with cheating software, including 80,000 with engines built by Audi.

Volkswagen gave up selling diesels in the United States after the scandal came to light, and has been trying to remake itself as a pioneer in affordable electric vehicles.

In line with German privacy rules, prosecutors publicly identified only Mr. Stadler among the four co-defendants because he is considered a public figure. But the names of two of the others have been widely reported. They are Mr. Hatz and Zaccheo Giovanni Pamio, 63, who was head of thermodynamics in Audi’s engine development department and is cooperating with the authorities. The fourth defendant was identified only as Henning L., a 52-year-old engineer.

The only Volkswagen employees to be convicted in connection with the scandal so far were apprehended in the United States.

James Liang, an engineer who worked for Volkswagen in California, received a 40-month sentence after pleading guilty in 2017 to conspiracy to defraud the United States and violating the Clean Air Act. Mr. Liang was released last November, prison records indicate.

Oliver Schmidt, who worked as Volkswagen’s liaison with American regulators, was sentenced to seven years in prison in 2017 after pleading guilty to charges that he helped cover up the wrongdoing. Mr. Schmidt was released last week, prison records indicate. The German edition of the Business Insider website reported Monday that Mr. Schmidt was transferred to Germany, where he is expected to be placed on probation.

Germany does not extradite its own citizens, so other suspects are safe from justice in the United States if they do not leave the country.