The Pulitzer committee honored The New York Times with the prestigious public service award for its “prescient and sweeping” coverage of the Covid-19 pandemic, particularly for filling “a data vacuum that helped local governments, health care providers, businesses and individuals to be better prepared and protected.” Read the coverage here.

Staff of The Star Tribune of Minneapolis

The Star Tribune won the award for its “authoritative and nuanced” coverage of the murder of George Floyd.

Finalists Staff of The Courier-Journal, of Louisville, Ky.; Helen Branswell, Andrew Joseph and the late Sharon Begley of STAT, Boston

The Boston Globe won the investigative reporting award for its extensive coverage of dangerous truck drivers and the failure of state governments to keep them off the road.

The Pulitzer committee honored a team of Reuters reporters for their coverage of an arcane legal doctrine that “shields police who use excessive force from prosecution.” The Atlantic’s science reporter Ed Yong won the award for his coverage of the pandemic. 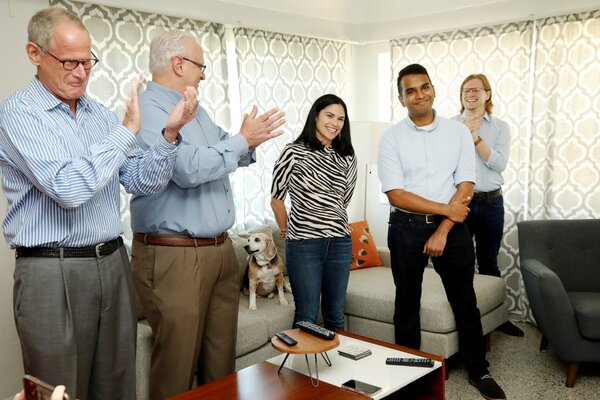 Kathleen McGrory and Neil Bedi of The Tampa Bay Times

The committee recognized an exposé of a powerful sheriff in Florida, Chris Nocco, who harassed residents and used private child welfare records and academic grades to profile schoolchildren as potential criminals, effectively terrorizing members of his community.

Finalists Jack Dolan and Brittny Mejia of The Los Angeles Times; Staff of The Post and Courier of Charleston, S.C.

Staffs of The Marshall Project, AL.com of Birmingham, Ala., IndyStar of Indianapolis, and the Invisible Institute of Chicago

A yearlong investigation revealed a pattern of disturbing attacks by police K-9 units across the country, including incidents in which innocent civilians were injured or, in at least one case, killed.

Michael Paul Williams of the Richmond Times Dispatch in Virginia

For “penetrating and historically insightful columns” that helped to guide Richmond’s process of dismantling monuments to Confederate leaders during the Civil War.

For “unrelentingly relevant and deeply engaged criticism” with a set of essays that explored the intersection of race and pop culture with insight, acuity and urgency. Read the essays here.

For a collection of editorials that examined the nuances of a variety of topics relating to the Los Angeles criminal justice system.

Photography staff of The Associated Press

For a collection of photographs taken in U.S. cities that captured the nationwide response to the murder of George Floyd.

Emilio Morenatti of The Associated Press

For a series of photographs documenting the lives of Spanish elderly during the Covid-19 pandemic.

The podcast “No Compromise” examined a group of American right-wing activists with extreme pro-gun views and a burgeoning following on social media.

Finalists Staff of National Public Radio; Staffs of the Invisible Institute of Chicago, The Intercept and Topic Studios

Ms. Frazier, the young woman who took out her cellphone to record the killing of George Floyd, was recognized for the video that spurred a global reckoning with police brutality.

“The Night Watchman,” by Louise Erdrich

This entry in the ongoing Chippewa chronicles takes place in the 1950s, its title character inspired by Ms. Erdrich’s grandfather and the letters he sent to politicians in Washington in an effort to save his tribe.

Finalists “A Registry of My Passage Upon the Earth,” by Daniel Mason; “Telephone,” by Percival Everett

“Franchise: The Golden Arches in Black America,” by Marcia Chatelain

“Franchise” connects McDonald’s with the civil rights movement, telling the history of the increasingly intricate ties between the fast-food behemoth and Black communities.

Finalists “The Deviant’s War: The Homosexual vs. the United States of America,” by Eric Cervini; “The Three-Cornered War: The Union, the Confederacy, and Native Peoples in the Fight for the West,” by Megan Kate Nelson

“The Dead Are Arising: The Life of Malcolm X,” by the late Les Payne and Tamara Payne

This poetic biography, completed by Les Payne’s daughter and principal researcher, Tamara Payne, after his death in 2018, reconstructs the conditions and key moments of Malcolm X’s life, using hundreds of original interviews with his family, friends, colleagues and adversaries.

Finalists “Red Comet: The Short Life and Blazing Art of Sylvia Plath,” by Heather Clark; “Stranger in the Shogun’s City: A Japanese Woman and Her World,” by Amy Stanley

The New York Times Book Review called this collection, which showcases Ms. Diaz’s gift for musicality and imagery and centers the experiences of queer women of color, “no doubt one of the most important poetry releases in years.”

Finalists “A Treatise on Stars,” by Mei-mei Berssenbrugge; “In the Lateness of the World,” by Carolyn Forché

“Wilmington’s Lie: The Murderous Coup of 1898 and the Rise of White Supremacy,” by David Zucchino

The book detailed the forgotten history of a coup against an elected multiracial government in North Carolina, tracing efforts by white supremacists to establish white rule in Wilmington while cinematically detailing the bloody assault on Black residents of the town.

In this work about a quest to make award-winning chicken wings, Ms. Hall, 40, challenged conventional definitions of manhood and fatherhood in Black America.

This understated, hauntingly inconclusive work for orchestra was premiered by the New York Philharmonic in February 2020 in honor of the 19th Amendment, which extended the vote to women. The courage of Susan B. Anthony and Ms. León’s progressive grandmother inspired music of wild energy, with an ominous undercurrent.