The Centers for Disease Control and Prevention on Friday urged that K-12 schools be reopened and offered a comprehensive science-based plan for doing so speedily, an effort to resolve an urgent debate roiling in communities across the nation.

The new guidelines highlight the growing body of evidence that schools can openly safely if they put in effect layered mitigation measures. The agency said that even when students lived in communities with high transmission rates, elementary students could receive at least some in-person instruction safely.

And middle- and high-school students, the agency said, can attend school safely at most lower levels of community transmission — or even at higher levels, if schools put into effect weekly testing of staff and students to identify asymptomatic infections.

The “C.D.C.’s operational strategy is grounded in science and the best available evidence,” Dr. Rochelle Walensky, director of the C.D.C., said on Friday in a call with reporters.

The guidelines arrive in the middle of a debate that is already highly fraught. Some parents whose schools remain closed are becoming increasingly frustrated, and public school enrollment has declined in many districts across the country. Education and civil rights leaders are despairing about the harms being done to children who have not been in classrooms for nearly a year.

And teachers’ unions in some places are fighting against reopening schools before teachers can be fully vaccinated.

The Biden administration has made a high priority of returning children to classrooms, and the new recommendations try to carve a middle ground between school officials as well as some parents who are eager to see a resumption of in-person learning and powerful teachers’ unions that are resisting a return to school settings that they regard as unsafe amid the coronavirus pandemic.

Whether the guidelines will persuade powerful teachers’ unions — allies of President Biden — to support teachers returning to classrooms remains to be seen. In advice that may be disappointing to some unions, the document states that although teachers should be vaccinated as quickly as possible, teachers do not need to be vaccinated before schools can reopen.

The document embraces the often-repeated mantra that schools should be the last settings to close in a community and the first to reopen. But that has been followed nowhere in the country, and these guidelines have no power to force communities where transmission remains high to take steps, such as closing nonessential businesses, to decrease it.

As a result, some teachers’ unions will continue to argue that the overall environment remains unsafe to return to in-person classrooms.

A majority of districts in the country are offering at least some in-person learning, and about half of the nation’s students are learning in classrooms. But there are stark disparities in who has access to in-person instruction, with urban districts, which serve mostly poor, nonwhite children, more likely to be closed than nonurban ones.

Those are some of the places where education experts are most concerned about the consequences of students being out of school for such a prolonged period. There is growing evidence that some students who are learning remotely are falling significantly behind academically.

And, while data are still very limited, many doctors and mental health experts report seeing unusually high numbers of children and adolescents who are depressed, anxious or experiencing other mental health issues.

At the same time, many parents in urban districts, particularly poor and nonwhite parents, remain hesitant to send their children back to school even if given the option, out of fear that their children can get sick and possibly bring home the virus.

Schools have reopened partially or are starting to reopen in New York City, Chicago, Boston and other cities. But conflict between elected officials who support reopening and teachers’ unions seems likely to continue in places like Los Angeles, San Francisco and Portland, Ore., despite the new guidelines.

School district leaders have long asked for clearer guidelines from the federal government on how they should make decisions during the pandemic. The C.D.C.’s advice comes as a relief to many experts who have been frustrated at the low priority given to schools in local reopening plans.

“It’s not saying if you open schools again,” said Helen Jenkins, an infectious disease expert at Boston University and an adviser to the public schools district in Cambridge, Mass. “It’s saying, ‘You are going to open schools again, and this is how to do it,’ which I appreciate.”

The agency’s approach struck the right balance between the risks and the benefits of in-person instruction, said Jennifer Nuzzo, an epidemiologist at the Johns Hopkins Bloomberg School of Public Health.

“We have accumulated a tremendous amount of harms from not having schools open,” Dr. Nuzzo said. “This document is important in trying to couch the risks in relation to those harms, and try to paint a path forward.”

The C.D.C. encouraged elementary schools to remain open regardless of virus levels in the surrounding community, pointing to evidence that young children are least likely to be infected or to spread the virus. Middle schools and high schools should switch to virtual learning only when community transmission of the coronavirus reaches the highest level, the agency said.

The agency also prioritized in-person instruction over extracurricular activities like sports and school events. In an outbreak, these activities should be curtailed before classrooms are closed, officials said.

Some experts raised concerns about the strategy.

Most school districts are in communities where viral transmission is already at or close to levels that the agency has deemed to be the highest risk, for example. Yet many have kept schools open without experiencing outbreaks of the virus.

“Most of the United States is sending their kids to school at above that cutoff,” said Dr. Jacqueline Grupp-Phelan, chief of pediatric emergency medicine at the University of California, San Francisco. “I’m not sure it’s going to make an impact on them, because they’re doing it and they’ve done it safely.” 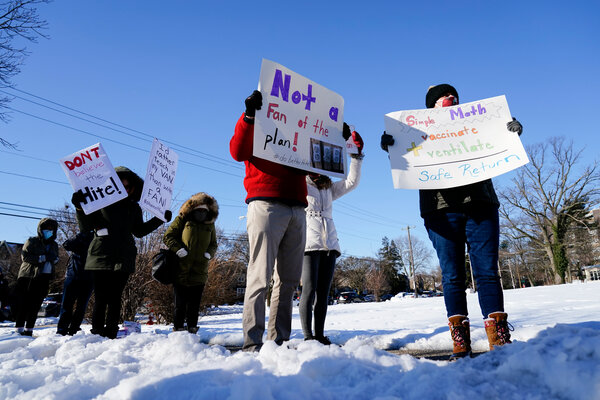 Notably absent from the agency’s guidance were recommendations on improving ventilation in schools, an important safeguard now that the coronavirus is known to be carried aloft in tiny airborne particles.

In one short paragraph, the C.D.C. suggested that schools open windows and doors to increase circulation, but it said they should not be opened “if doing so poses a safety risk or a health risk.”

“C.D.C. gives lip service to ventilation in its report, and you have to search to find it,” said Joseph Allen, an expert on building safety at the Harvard T.H. Chan School of Public Health in Boston. “It’s not as prominent as it should be.”

The section on ventilation does link to more information online. But all of that is buried, relative to a misguided emphasis on cleaning surfaces like outdoor playground equipment, said Linsey Marr, an expert in airborne transmission of viruses at Virginia Tech.

Ideally, the C.D.C. should also have mentioned high-quality masks or double-masking, Dr. Allen said. (The agency on Thursday released new advice for wearing masks that included the use of two masks at once.)

Other preventive measures the C.D.C. recommended for schools are those it has previously endorsed: universal mask wearing for staff members and students; physical distancing; hand-washing and hygiene; cleaning; and contact tracing, in combination with isolation for those who have tested positive and quarantine for those who have been exposed to the virus.

The agency advised that schools refer all symptomatic students, teachers, staff and close contacts for diagnostic testing, and that schools put in place routine weekly testing of students and staff, except when community transmission is low. But the expense and logistics of widespread screening would be a heavy burden for school districts.

The C.D.C. skated lightly over physical distancing. The agency’s previous recommendation for distancing suggested that schools have students attend on alternating schedules, in order to reduce the number of students in classrooms and hallways.

The new guidance instead says schools should put in effect physical distancing “to the greatest extent possible,” but requires it only when community transmission of the virus is high. The softer emphasis makes the guidelines more feasible for school districts to follow, Dr. Nuzzo said.

“A lot of communities have pursued hybrid approaches, or in some cases just not opened, because they haven’t been able to figure out that spacing issue,” she said. The guidelines give the impression that maintaining at least six feet of distance between students is ideal, “but the whole attempt to bring kids back to school doesn’t have to break down over that,” she added.

The six-feet rule has been embraced as an orthodoxy, however, by many educators. Becky Pringle, president of the National Education Association, the country’s largest teachers’ union, said there should be no wiggle room on physical distancing or other mitigation strategies.

“We need detailed guidance from the C.D.C. that doesn’t leave room for political games,” she said. “This is an airborne disease. Masks must be mandated, social distancing must be in place and proper ventilation is a must.”

The latest on how the pandemic is reshaping education.