The unimpressed BBC Question Time audience member dismissed the ongoing Brexit deal row between the UK and the European Union as “nonsense.” The EU caused an uproar this week after threatening to cut off access to chilled meats produced in Britain into the Northern Ireland market because of non-compliance to union law. But the audience member slammed the move, insisting the bloc should just “accept” the nation is part of the UK and they have no jurisdiction over goods travelling in from the mainland.

He said: “It’s absolute nonsense, is it? Nobody is suggesting for a minute that chilled meats coming from the mainland to Northern Ireland is in any way unsafe.

“Come on EU, accept the fact that Northern Ireland is part of the United Kingdom.

“Let’s get round the table and sort it out.”

The audience member also noted the ongoing customs arrangements, which effectively see Northern Ireland abide by customs union and single market regulation contrary to all other parts of the UK, are due to have a negative effect on the neighbouring Republic of Ireland. 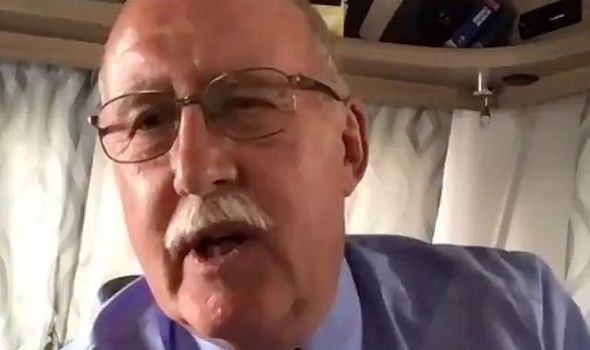 He continued: “The people in Southern Ireland must be appalled, it must have an impact on their freedom of movement as well and free trade.

“These things can all be sorted out if there’s a willingness from both parties to get together, address it with some common sense and move on.”

Prime Minister Boris Johnson is due to meet with Emmanuel Macron and Angela Merkel as well as European Commission Ursula von der Leyen as the leaders arrive in Cornwall to attend the G7 Summit on Friday.

Previous negotiations between Lord Frost and Commissioner Maros Sefcovic failed to produce a resolution to the row, with the UK urging Brussels to be “more pragmatic” after accusing the bloc of being “excessively burdensome” in its interpretation of the Northern Ireland protocol.