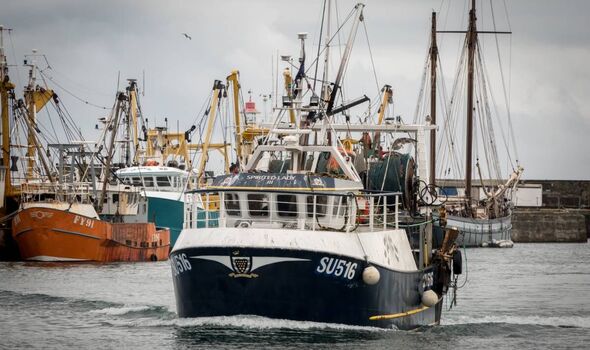 British boats will be able to catch up to 140,000 tonnes of fish worth more than £280 million. Environment minister Mark Spencer said: “Our agreement with the EU secures valuable fishing opportunities for the UK fishing industry while cementing our joint commitment to manage fisheries sustainably.

“These decisions are based on the latest scientific advice to help protect key fish stocks with the long-term health of the marine environment at the forefront of our minds.

“We are backing the fishing industry across the country to succeed, with a landmark £100m investment in infrastructure, skills and better scientific data so that our fishing industry thrives for generations to come.”

He added: “As a result of the quota share uplifts agreed in the trade and cooperation agreement, the UK has around 30,000 tonnes more quota from these negotiations and it would have received if it were as it would… as a previous member of the EU.”

The National Federation of Fishermen’s Organisations said it “broadly welcomes the final outcome of these negotiations”.

Shetland Fishermen’s Association said it was pleased that monkfish quotas had not been restricted as much as feared.

Executive officer Simon Collins added: “People should understand that no-one has a greater interest in sustainable fishing than the fishermen and communities whose futures depend on it.”

But Conservationists said the agreement allows overfishing and raised concerns about the reopening of the fishery for spurdog, or spiny dogfish, which is listed as “vulnerable” to extinction.

Charles Clover, executive director of the Blue Marine Foundation, said: “These catch limits show that the mismanagement of UK and EU seas is set to continue.

“Some of the limits agreed are better than last year, when 65 percent were set above scientific advice, but it is clear that the parties have again agreed to allow significant and demonstrable overfishing in the face of scientific evidence and their own laws.”

Hugo Tagholm, executive director, Oceana UK, said: “The UK and EU continue to break their own fisheries laws, setting quotas above scientific advice and risking the long-term viability of the fishing industry, as well as driving the marine biodiversity crisis.

“Urgent action must be taken to allow fish stocks to recover, restore our marine ecosystems and ensure food security for future generations.”