After leaving the EU on January 31 Britain is currently living under EU rules in a transition period until the end of 2020 and it is understood that senior civil servants have suggested that this is extended. The Sunday Express has been told that their advice is that Britain and the EU do “not have the necessary bandwidth” to carry out trade negotiations on a tight timescale and deal with a major crisis in the coronavirus.

A senior minister has also briefed that he believes the UK could be forced to delay.

However, Mr Johnson has vowed not to extend the transition period and if necessary go on to an Australia style relationship with the EU on world trade organisation rules.

A source close to the Prime Minister told the Sunday Express: “A transition period extension is not an option.”

The tough line comes after a draft trade deal drawn up by the EU confirmed that Brussels intends to push for Britain to share its fishing waters and accept EU rules on standards enforced by the European Court of Justice.

Sources have said the proposal is “unacceptable”. 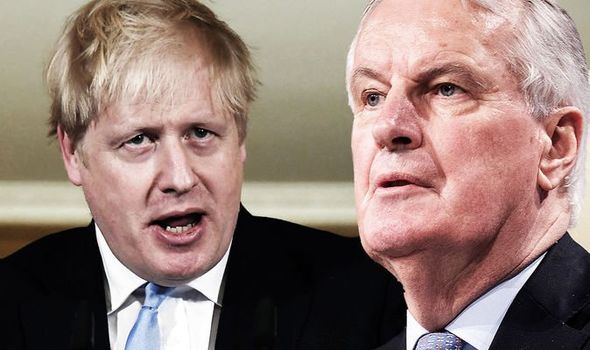 Mr Johnson has made it clear that the only deal that can be done is one similar to those enjoyed by Canada, Japan and South Korea with the EU where there is tariff free access but the two parties are responsible for their own regulatory frameworks.

Unless the EU compromises it is likely that transition will end on December 31 without a trade deal while the UK is hopeful of deals with the US, Australia and New Zealand instead.

At a recent Bruges Group conference of Brexteers Mark Francois, the new chairman of the European Research Group (ERG) of eurosceptic Tory MPs, said he has the numbers to block any compromise with the Eu that would undermine Brexit.

He told the meeting that the ERG would not be disbanded “because we have an important role in monitoring the trade negotiations”.

He added: “A considerable number of the the 2019 intake are Eurosceptic minded and you might like to know that we have been recruiting very healthily among the new crop of Conservative MPs – who are absolutely determined to keep their promises to the British electorate.”

A transition period extension is not an option

Theresa May, Mr Francois went on: “In the event of a Chequers style aberration emerging from the negotiations we do therefore have the numbers to intervene decisively should we have to.”

Meanwhile, leading economists have warned that extending the transition period would be disastrous.

Roger Bootle, chairman of Capital Economics, said: “The Prime Minister has many times said that it wouldn’t be and it would give all the wrong signals if he went back on that, frankly.

“But also, we just need to get on with this. We’ve been faffing around with regard to Brexit for heaven knows how long.

“I’m hopeful – I’m not confident but I’m hopeful – that the EU is going to see sense and want to do a deal because there’s no doubt it can be done. I mean their economy is in a pretty bad way because Italy was in a very bad way before the coronavirus.”

Professor David Paton of Nottingham University Business School added: “There are certain people who will always find an excuse to want to extend the transition period. I really can’t see the need for that.

What that would do is bring yet more uncertainty into an economy that’s already reeling from lots of uncertainty.

“We’ve got a plan and people have been very clear – we’re leaving the customs union and so on at the end of December and we need to make sure that happens. I can’t really see any reason [for] the current crisis to really hold up trade negotiations…

“In some ways delaying the transition period means we continue paying money to Brussels so that actually reduces some of the spending power of the government.”

Mujtaba Rahman, managing director for Europe at the Eurasia Group, expects Britain will face the choice of signing up to a zero-tariffs deal or going it alone and trading with the EU on World Trade Organisation (WTO) terms.

Arguing there was not enough time for the remaining member states to reconcile competing interests and decide which industries would take a hit on tariffs, he said: “A discussion along those lines takes a lot longer – years, not months. It would take a very long time to agree internally among the 27.

“I think the outcome is quite binary – either zero tariffs/zero quota or WTO. I don’t think there is anything in the middle.”