The EU’s chief Brexit negotiator is now expected in London this weekend after he had warned UK counterpart David Frost on Wednesday he would pull out of the upcoming trade talks if Britain did not shift its position. There has been uncertainty over whether the in-person talks would be resuming on Saturday, deepening the crisis in the increasingly bitter trade talks with just over a month to go until the end of the transition period on December 31. Confusion increased on Thursday evening when the Prime Minister’s official spokesman could not confirm whether discussions would go ahead.

When asked if Mr Barnier is expected in London this weekend, he said: “That is a matter for the EU and a decision for them to take.”

The response from Downing Street illustrates the tension-filled relationship that is increasingly building between the UK and EU negotiating teams.

Fishing has arguably remained the biggest sticking point, with Brussels continuing to push the UK for concessions on access to British waters. 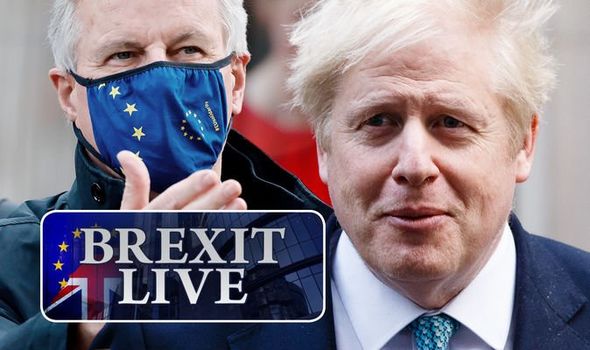 London had suggested a review could take place in 3-4 years in an attempt to make significant ground on the issue, but the EU suggested in a meeting conducted by video link earlier this week this could be reviewed in 10 years – tying UK to the bloc’s rules for a further decade.

But Mr Johnson has stood firm and told the House of Commons on Wednesday he guaranteed British sovereignty would be protected for the whole of the UK over the transition period is completed in just over four-weeks’ time.

The Prime Minister told Parliament: “Our position on fish has not changed.

“We will only be able to make progress if the EU accepts the reality that we must be able to control access to our waters. It is very important at this stage to emphasise that.”

Michel Barnier is expected to travel to Lodnon to resume post-Brexit trade talks with the UK this weekend as time tuns out to get an agreement over the line before the transition period deadline ends on December 31.

The EU’s chief Brexit negotiator has warned UK counterpart David Frost on Wednesday he would pull out of the upcoming trade talks if Britain did not shift its negotiating stance within 48 hours.

On Thursday evening, Downing Street would not confirm whether discussions would go ahead.

When asked if Mr Barnier is expected in London this weekend, he said: “That is a matter for the EU and a decision for them to take.”

But EU sources have suggested the chief Brexit negotiator is expected to travel to Lodnon to resume face-to-face talks.

8am update: Brexit deal UP TO THE EU says Britain as anger mounts over Brussels’ ‘changing approach’

The UK believes the EU will not “drink up” a bid to secure a Brexit trade deal despite official forecasts warning of a major economic hit if a trade deal is not secured.

Whitehall sources last night suggested a deal was not likely before next week at the earliest as the talks between both sides continue virtually in a desperate bid to secure a deal.

The UK is set to leave the single market and customs union in any event but work continues on a deal to allow smooth trade with no quotas or tariffs.

However, talks between both sides have been stuck at an impasse on the issues of fishing rights, the governance of any deal and the “level playing field” conditions aimed at preventing unfair competition by cutting standards or increasing state subsidies.

Environment Secretary George Eustice said: “It’s no secret that there have been two difficult sticking points – state aid and fisheries.

“Our negotiating team is working hard to try and get a breakthrough and to ensure that we have a free trade agreement and a future partnership.”