Mr Macron has been in talks with Mr Johnson about the possibility of Britain joining a new “European political community”. The Élysée Palace suggested that the UK had shown “interest” in the plans during a bilateral meeting at the G7 summit in Germany earlier this week.

But the Prime Minister has said he would prefer a broader deal and create a new Roman Empire of European countries and neighbouring allies in northern Africa.

Mr Johnson told journalists while travelling to Madrid for a Nato summit this week that he had the idea first while serving as Foreign Secretary, a position he held from 2016 to 2018.

“Of course Ukraine, Turkey, Maghreb, there’s got to be a role for all of us in a wider conversation about issues that affect all of us.” 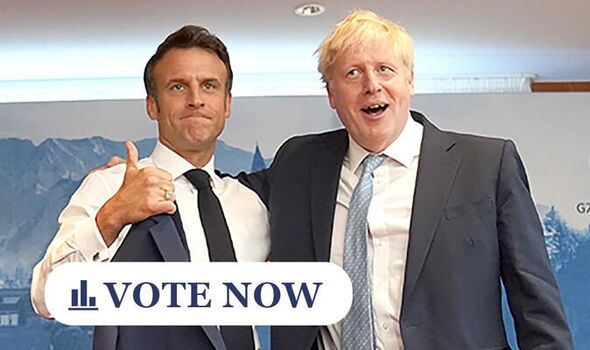 He continued: “I think possibly what’s going on here is that there are several different ideas. That doesn’t mean that they are necessarily all the same.

Mr Johnson said that he was not interested in any formal structure for a wider European club but said Mr Macron’s idea was “worth looking at”.

But he added: “I think possibly rather than inventing new structures, let’s look at building up relationships.”

However, Brexiteers fear Mr Macron’s plans would frag the UK back into the EU’s remit.

Conservative MP and former Brexit Minister David Jones said: “Macron is obsessed with building a new political vehicle in Europe to counteract what he sees as the dominance of the Anglosphere… we must make clear we are not disposed to participate in what looks like an EU 2.0.”

Foreign Secretary Liz Truss said that the UK had not agreed to any of Mr Macron’s proposals.

She told senior Tory MP Tom Tugendhat: “I don’t know the exact words that president Macron has used, but we have not agreed to that.”

So what do YOU think? Should Boris Johnson plunge the UK into a new European ’empire’ with EU states? Vote in our poll and join the debate in the comment section below.