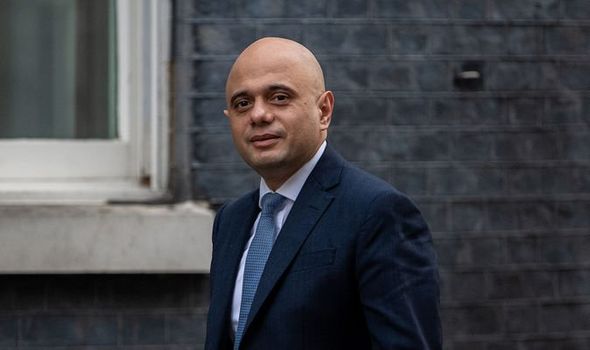 Latest figures showed a dramatic drop in coronavirus cases as well as a dip in the number of people being hospitalised with the disease.

And, in another sign the country is through the worst, Health Secretary Sajid Javid announced self isolation for people who test negative will be cut to five days.

Prime Minister Boris Johnson thanked him “for his extraordinary contribution to our country and his invaluable advice”.

Mr Javid said: “JVT’s one-of-akind approach to communicating science over the past two years has no doubt played a vital role in protecting and reassuring the nation and made him a national treasure.” The professor said: “It has been the greatest privilege of my professional career to have served the people of the UK during this time.”

He has been on secondment to the Department of Health from the University of Nottingham since 2018 and will now take over as provice chancellor at its faculty of medicine and health sciences.

NHS England figures showed just under half of all patients with Covid are actually in hospital for other reasons. Of the 15,026 who had the virus on January 11, 6,647 were not being treated principally for it.

Mr Javid said there were “encouraging” signs that Covid hospital admissions were starting to ease and infections were falling in London and the East of England.

But he urged “caution” as cases are still rising in other parts of the country and the impact of people returning to work and school in the New Year has not yet been felt.

He also told MPs the UK was “leading the world in learning to live with Covid” thanks to vaccines, testing and antivirals.

Almost eight in 10 adults have had their booster, 400 million lateral flow tests will be available this month and the Government has secured almost five million courses of antivirals.

The Health Secretary also announced people will be able to leave isolation early on the sixth day if they test negative on both days five and six from Monday.

If the day five test is positive, they must isolate until they test negative on two consecutive days or completed the full 10-day period.

Two-thirds of positive Covid cases are not infectious by the end of day five. The Royal College of Nursing said the change could raise the risk of NHS workers spreading it. The NHS Confederation said it was welcome if more workers “can return to the front line”.

What was your favourite JVT analogy during the pandemic?

Early successful vaccine trials making Covid like a train slowing down as it approaches a station, or comparing Omicron to yellow cards leaving a football team having to fight harder after a player is sent off?

His analogies and mixed metaphors, often delivered in the middle of grim Downing Street press conferences, were not just a welcome moment of light relief.

They were also examples of great science communication – a leading public health scientist summarising complex data and huge uncertainty in a way the public could grasp.

This gift and the eccentricity of his style caught our imagination and warmed us to him.

Some criticised JVT, Chris Whitty and Patrick Vallance for not being more outspoken in criticising the Government. But the chief medical officers inside Whitehall must walk a fine line between politics and science.

Pop up lambasting the Government at every turn and they would soon be sacked or, at best, ignored.

By avoiding political rows and sticking to presenting the science,

JVT maintained the public’s trust and that of our political leaders.

It has also been obvious when the data he presented at Downing Street press briefings painted a bleaker picture than the one acknowledged by Boris Johnson.

And we were certainly not left in any doubt about what he thought about Dominic Cummings’ trip to Barnard Castle, when he said: “In my opinion the rules are clear and they have always been clear…In my opinion, they apply to all.”