The former Chancellor is in a battle to cement his position as the frontrunner in the race to succeed Boris Johnson. 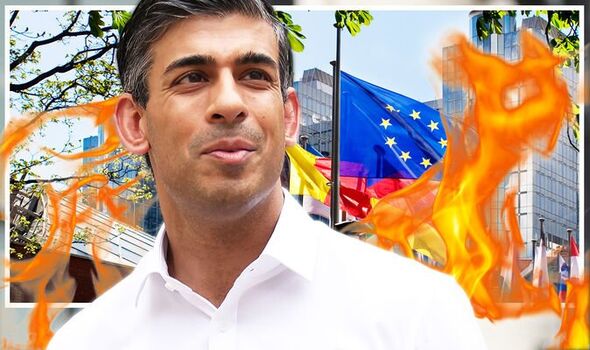 Ahead of Sunday night’s television debate with his rivals, Mr Sunak has promised to stage an overhaul of EU laws in his first 100 days as Prime Minister.

The leadership candidates are competing to win the votes of MPs who backed diehard Brexiteer supporter Attorney General Suella Braverman before she was knocked out of the running. Votes by MPs this week will determine which two contenders will face the Tory membership in the final round of the contest.

Mr Sunak has grasped the opportunity to remind the party of his support for Brexit at a time when the biggest figures in government were campaigning for the UK to remain in the EU.

He said: “In 2016, I was told by my party leadership that if I backed Brexit, my political career would end before it had even begun. I backed Brexit regardless because I knew it was the right thing for the country.

“We need to capitalise on these opportunities by ditching the mass of unnecessary regulations and low-growth mentality we’ve inherited from the EU. I have a plan, if elected Prime Minister, to have scrapped or reformed, by the time of the next election, all the EU law, red tape, and bureaucracy still on our statute book that is holding back our economy.”

If Mr Sunak wins the keys to No 10, his campaign says he would appoint a Brexit minister to review the “remaining 2,400 EU laws on the statute book.” The first set of recommendations to scrap or change these laws would come within 100 days.

Arguing that Brexit has unlocked new economic opportunities for the UK, he said: “As Chancellor, I led the government in seizing the opportunities of Brexit through huge free trade initiatives such as Freeports.

“As Prime Minister, I would go further and faster in using the freedoms Brexit has given us to cut the mass of EU regulations and bureaucracy holding back our growth. If we do this, we can get our economy growing quickly again and become the most prosperous country in Europe.”

However, Brexit opportunities minister Jacob Rees-Mogg – who is supporting Foreign Secretary Liz Truss’s leadership campaign – said the Treasury had been “extremely unhelpful” and resisted his efforts to ensure that taxation is not subject to EU-era law and regulations.

He said: “It is slightly surprising he wants to do this… As when he was Chancellor he could have been helpful in repealing EU law, it is most peculiar that he has suddenly had a Damascene conversion when he wants votes.”

Mr Sunak has been forced to defend a raft of decisions taken at the Treasury but on a visit to Teesside, where he secured the backing of regional mayor Ben Houchen, he dismissed accusations he had been a “socialist chancellor.”

He said: “I think the number one economic priority we face as a country is inflation. I want to get a grip of inflation because inflation is what makes everybody poorer.

If we don’t get a grip of it now it will last longer and that is not a good thing. Once we’ve done that, I will deliver tax cuts.”

Conservatives face the challenge of deciding which candidate has the best values and who stands the strongest chance of keeping the party in power. Former Welsh Secretary Alun Cairns has decided that Mr Sunak is the best communicator.

The Vale of Glamorgan MP said: “I’m confident that out of all the candidates Rishi will resonate with the public more. That is one of my acid tests – how will they go down with the public?”

He added: “Let’s not be ideological about this. Let’s pick a winner who is going to beat Labour at the next election.”

Rival candidate and international trade minister Penny Mordaunt has asked members of the public to contact their local MP to ask them to support her.

She said on Twitter: “I’m very aware that while my party chooses a new leader, you are watching us pick your next Prime Minister. At some point, you will all have a vote. Contact your local MP to ask for their support for me and I will focus on making our nation all it can be.”

Meanwhile, Foreign Secretary Liz Truss has made the case that only she can “unite the whole Conservative party and whole the country.”

Fellow contenders Kemi Badenoch and Tom Tugendhat are also battling to be among the two candidates who will be voted on by the party membership. Ms Badenoch says she is “in this race to win it” and Mr Tugendhat says he is “determined to fight on in this contest and champion conservative values.”

Mr Sunak will hope his commitment to a bonfire of red tape in pursuit of economic growth will win support across the country.

He wants to lead a transformation of the City of London and make it the world’s leading financial centre by 2027. Just as the City of London became a favourite location for international banks with the “Big Bang” of 1986 which saw the introduction of electronic trading, he wants the cutting of red tape to “trigger Big Bang 2.0.”

Mr Sunak also plans to make it easier for insurers to invest in infrastructure and plans to overhaul the GDPR rules which govern how personal data can be used. The 42-year-old argues that the regulations both stop British tech companies innovating and make it harder to fight crime.

He further claims that axing EU bureaucracy will also allow the country to speed up the clinical trials approval process.