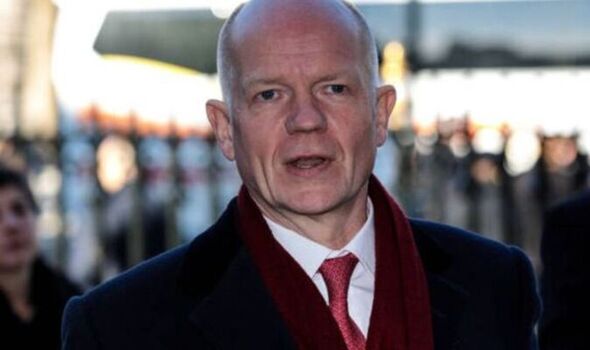 William Hague has revealed he was branded “a bit of a freak” after delivering a speech at the Conservative Party conference when he was just 16 years old. The former Tory leader advised teenagers today, at the Cheltenham Literature Festival, not to follow in his footsteps.

Mr Hague, who also held the position of Leader of the House of Commons in 2014, became a national figure after the speech in 1977.

But he now believes it was an unwise decision to be such a high-profile political figure during his teenage years.

At the literature festival on Friday, he told the audience: “It would have made my subsequent political career easier not to have done that because I have since learnt that it is much easier in a political career if they don’t see you coming.

“And also, if you do that as a teenager, they do think you are a bit of a freak for the rest of your life.”

Mr Hague became parliament’s youngest MP when was elected to the Richmond constituency in North Yorkshire in 1989.

He was aged just 27 at the time and warns other young politicians of following in his footsteps.

“Teenagers sometimes approach me [saying], ‘I want your advice because you gave that speech when you were 165′”, he told festival goers.

He said he always tells aspiring politicians: “Don’t do it”, which he says usually leaves them looking disappointed.

The former Tory politician said he was probably more experienced at giving speeches than the majority of people at the conference in Blackpool.

He said this was thanks to his comprehensive-school education in South Yorkshire, where he was involved in religious discussion groups and the debating society.

Mr Hague told the audience: “That is why it was so freakish”, but added: “I am still proud of it. Life would have been easier without it but it was a heck of a day out when you are 16 and you stand up and tell everybody what to do.”

He said: “I was telling him how to run the country and he could not contradict me in case he was nasty to a child. So, what a day out. I am still proud of that young person who got up and said what he thought — but in terms of political calculation, not a good idea.”

During his 1977 speech, Mr Hague told delegates: “Half of you won’t be here in 30 or 40 years’ time…, but that others would have to live with consequences of a Labour Government if it stayed in power.”

But the now 61-year-old said he has regrets about running for the party leadership in the wake of a Conservative Party wipeout.

Hague also ruled out a return to frontbench politics, which he said had become much nastier with the advent of social media.

He joked after having been “an elder statesman at 16”, he now has different priorities, saying: “I can be decadent and out of control in my eighties.”