Lord Hein, the former Northern Ireland Secretary, insisted Boris Johnson should address the ongoing unrest in Belfast and Derry by arranging an immediate meeting with the European Union. Northern Ireland became a pivotal pawn during Brexit negotiations with Brussels and has been the only nation of the UK to remain in effect in the single market. But tensions have rocketed since January because of the new post-Brexit trade rules resulting in violence against the police.

Speaking to Sky News, Lord Hain said: “There is a joint committee between the UK and the EU.

“What Boris Johnson should be doing, and his chief lieutenant Lord Frost, is getting into that committee with Brussels and sorting this out and they haven’t done that yet.”

He continued: “This was triggered by lorries having to be checked leaving Belfast and by other checks and controls across the Irish Sea between England, Scotland and Wales, and Northern Ireland even though they’re all part of the United Kingdom.

“That can be resolved. There are flexibilities within the protocol, the agreement that Boris Johnson signed and is part of international law as a result of leaving the European Union. 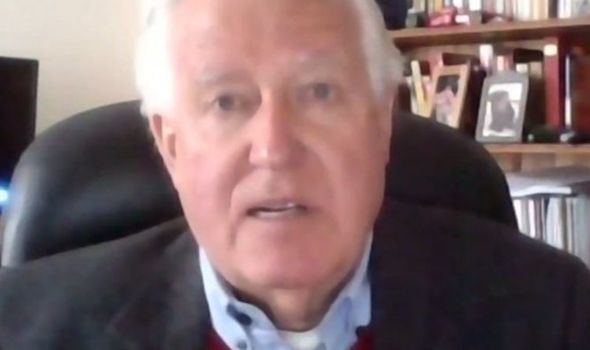 “There are flexibilities that should be assured and common-sense solutions bound to reduce the mountain of paperwork and make it as smooth as possible.”

The Labour peer admitted to being dismayed by the “disturbing and serious” unrest plaguing Northern Ireland.

Northern Ireland Secretary Brandon Lewis urged communities in Northern Ireland to come together to resolve tension there, saying he would hold meetings with leaders in the British province about recent violence.

“All communities in Northern Ireland must work together to resolve the tensions that we are currently facing,” Mr Lewis said in a statement.

READ MORE: Violence has returned to Northern Ireland and the EU is to blame – BEN HABIB

“The people of Northern Ireland deserve better than a continuation of the violence and disorder that we have witnessed in recent days.”

Mr Lewis added that he is “aware of the ongoing concerns from some in the unionist and loyalist community”.

“However, I remain clear that the right way to express concerns or frustrations is through dialogue, engagement, and the democratic process, not through violence or disorder,” he added.

“Following engagement earlier today, I welcome the statement from the Executive and join them in appealing for calm.

“I will do all I can to continue to facilitate further constructive discussions on the way forward over the coming days. I remain in close contact with the Prime Minister to keep him updated.”