The top Senate Republican told colleagues that he had advised the White House against striking a pre-election deal with Democrats to deliver pandemic aid, fearing political repercussions. 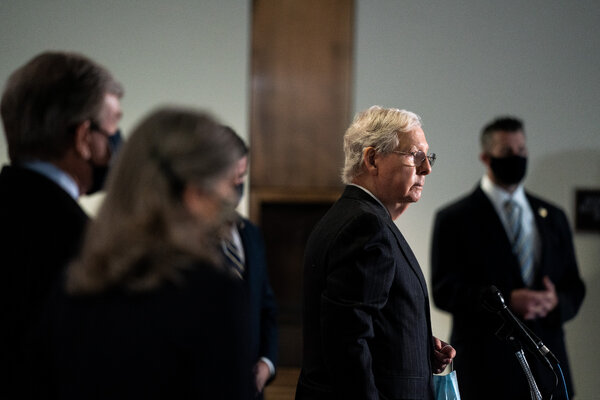 By Emily Cochrane and Nicholas Fandos

WASHINGTON — Senator Mitch McConnell, the majority leader, privately told Republican senators on Tuesday that he had warned the White House not to strike a pre-election deal with Speaker Nancy Pelosi on a new round of stimulus, moving to head off an agreement that President Trump has demanded but most in his party oppose.

Mr. McConnell’s remarks, confirmed by four Republicans familiar with them, threw cold water on Mr. Trump’s increasingly urgent push to enact a new round of pandemic aid before Election Day. They came just as Ms. Pelosi offered an upbeat assessment of her negotiations with Steven Mnuchin, the Treasury secretary, telling Democrats that their latest conversation had yielded “common ground as we move closer to an agreement.”

The cost of their emerging compromise on a new round of aid to hard-pressed Americans and businesses has steadily climbed toward $2 trillion, inching closer to Ms. Pelosi’s demands even as it far exceeds what most Senate Republicans have said they can accept.

With coronavirus cases continuing to rise across the country and tens of millions of American families and businesses going without critical federal benefits they relied on for much of the year, economists and the chair of the Federal Reserve have said now is the time for a substantial infusion of federal money to fuel a still-shaky economic recovery.

A majority of voters agree, saying they would support a $2 trillion stimulus package. And Mr. Trump, who only two weeks ago scuttled the bipartisan talks, is now also pushing urgently for Congress to “go big,” as he grasps for political advantage in the waning days of his re-election race.

Yet the developments on Capitol Hill amounted to an extraordinary scene two weeks before the election, in which a badly weakened president — once the object of unwavering loyalty from congressional Republicans, who rarely broke with him on any major policy issue — was throwing concessions at Democrats to cement a deal that his own party was resisting.

“He’ll be on board if something comes,” Mr. Trump said of Mr. McConnell, Republican of Kentucky, on Tuesday morning on “Fox and Friends.” “Not every Republican agrees with me, but they will.”