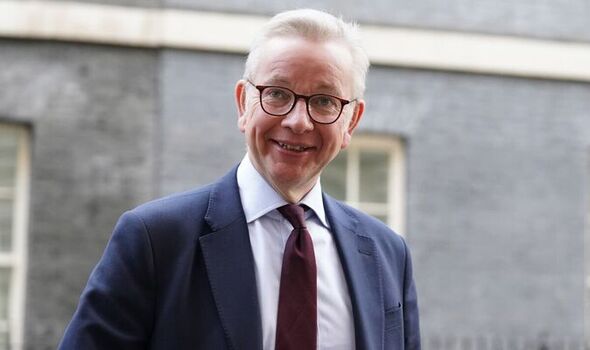 The two-year-old died from a respiratory condition caused by prolonged exposure in his family’s flat, a coroner ruled. Lawyers for Awaab’s family said Mr Gove committed to “Awaab’s law” to improve the experiences of those living with mould and damp in their properties.

Mr Gove was in Rochdale, Greater Manchester, on Thursday for talks with Rochdale Boroughwide Housing (RBH) after he stripped them of £1 million for new housing from the government until it proves it is a responsible landlord.

A Government source said: “The meeting with RBH was unsatisfactory.

“They yet again failed to answer basic questions about their operations and how they will ensure that tenants are safe in their homes.

“The Secretary of State does not have confidence in the leadership of RBH and will continue to pay very close attention to their work, in close co-operation with the regulator.

“He will not hesitate to take further action if necessary.”

Awaab’s parents Faisal Abdullah and Aisha Amin repeatedly complained about the mould but no action was taken before his son’s death in December 2020.

Gareth Swarbrick was sacked as RBH’s chief executive after the highly-critical inquest into Awaab’s death.

The family of the toddler also said they have “no confidence” in the leadership of the housing association which owned the flat that caused Awaab’s death.

In a statement, they said there is an “ever-present risk and danger” to RBH tenants without the current board’s resignation.

The statement continued: “RBH have immediate and urgent issues that need to be addressed to ensure the safety of their tenants.

“The family do not feel this board has the competence or credibility to do the job. This is a view that has been expressed by many.”

Lawyers for the family of the toddler told how they had a “productive” meeting with Mr Gove on Thursday, who committed to “Awaab’s law”.

“The family are pushing for the implementation of an Awaab’s law to ensure that no other family go through what they have been through,” lawyer Christian Weaver said.

He added: “Awaab’s law would significantly improve the experiences of those living with mould and damp in their properties, and is therefore crucial.

We are pleased that the Secretary of State has provided his support for an Awaab’s law.”

Mr Gove will return to Rochdale to meet the family in six months’ time.

The Housing Secretary wrote to all councils and housing associations at the weekend saying they “must raise the bar dramatically on standards” and demanding urgent action where people complain about damp and mould.

In an interview before the visit, Mr Gove said “at least” tens of thousands of homes are unsafe to inhabit.

Mr Gove added: “We know there are a significant number of properties, some of which were built in the ’60s and ’70s and are in poor conditions, but some of which have been poorly maintained that simply need to be properly repaired and properly maintained.”

The government has also announced a share of £14 million for seven areas with high numbers of poor, privately-rented homes to crack down on rogue landlords and drive up standards.

Greater Manchester – which includes Rochdale – will receive £2.3million to impose more fines on landlords found to have committed an offence.

The other areas are Liverpool, Cornwall, Eden in Cumbria, Ryedale in North Yorkshire and the Derbyshire Dales.