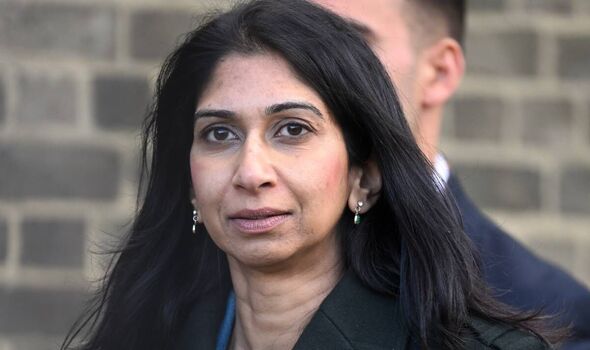 The Home Secretary is also looking into increasing the minimum salaries for companies employing skilled workers to reduce numbers. Her new blueprint would see the government pushing up the minimum income threshold for British citizens applying for a family visa for a spouse or children.

Currently, a couple must prove that they have an income of at least £18,600 and show evidence they have enough money to cover the costs of any children who do not have British citizenship.

Ms Braverman’s plans, which were reported by the Times, would also increase the minimum salary thresholds for workers filling jobs on the shortage occupation list, which gives employers in certain sectors more flexibility to hire from overseas.

Many of the thresholds have not been updated since 2012.

Occupations on the list include mechanical engineers, who employers can recruit from abroad if they pay at least 80 percent of the “going rate”, which is stated as £26,720.

The proposals to target certain areas of immigration were due to be unveiled in October but were put on ice following Liz Truss’s departure from No.10.

It is understood that Ms Braverman still wants to drive through her crackdown.

Rishi Sunak has pledged to reduce overall immigration by the next election but has insisted that his priority is tackling the small boats crisis, which has led to 45,000 migrants reaching the UK illegally this year.

The Prime Minister has also signalled he wants to cut foreign student numbers.

It comes as net migration hit an all-time record of 504,000 in the year to June, driven by a record high of 476,000 foreign students moving to the UK.

Downing Street has confirmed that the government will consider measures to reduce the number of foreign students, despite the 2019 higher education strategy including a target to hit 600,000 foreign students by 2030, which was met a decade early.

Numbers would be reduced by restricting access to the graduate visa, which allows any foreign student who has studied for a bachelor’s degree or higher to stay for at least two years.

Only those with in-demand skills would qualify, which is likely to include civil engineers and scientists.

Ms Braverman’s plans would make it harder for foreign students to bring dependants with them by raising the income threshold for each additional family member.

At present, students who want to bring a spouse, partner or child with them must earn at least £680 a month for each dependant.

Ms Braverman told a Lords committee last week that it was right to balance their economic contribution with the pressure they place on public services.