Boris Johnson: 'No one is shedding a tear' says Morgan

Boris Johnson told Graham Brady, the chairman of the 1922 Committee on Thursday, that he would remain in his position until October and the Conservative Party had elected a new leader. Tory MP Robert Buckland told BBC Newsnight that Mr Johnson would lead a cabinet to ensure the operation of Government can continue “efficiently and smoothly”.

Yet some Conservative MPs have called for him to stand down immediately and allow Deputy Prime Minister Dominic Raab to oversee the transition process.

Chris Loder, a 2019 MP for West Dorset, tweeted: “I’m afraid that Boris Johnson cannot stay on until the autumn.

“Government cannot function without ministers in place and I expect the Deputy Prime Minister to take over imminently whilst a leadership election takes place.”

Former Science Minister, George Freeman, said: “Now PM has finally done the decent thing he needs to hand in the seals of office, apologise to Her Majesty, allow her to appoint a caretaker under whom ministers can serve, so the Conservative Party can choose a new leader properly.” 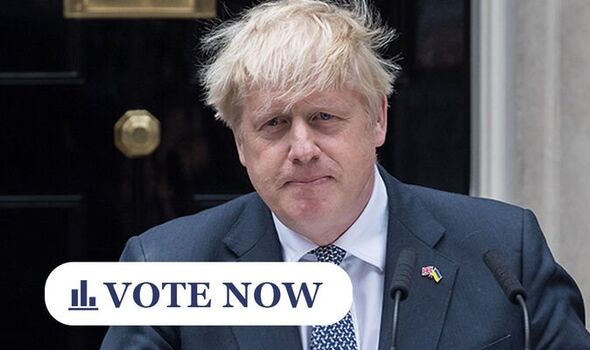 There is no provision for such an “interim leader” during a leadership contest and if Mr Johnson stayed he would retain all the functions of Prime Minister.

The Queen would need to ask Mr Raab to take on the role to head the Government and he would be expected to rule himself out of the leadership contest to remain above the fray.

The Labour Party are also threatening to call a no-confidence vote if Mr Johnson “clings on” to his position.

Labour leader Sir Keir Starmer said: “His own party has finally concluded that he’s unfit to be Prime Minister.

“If they don’t get rid of him, then Labour will step up in the national interest and bring a vote of no confidence because we can’t go on with this prime minister clinging on for months and months to come.”

So what do YOU think? Should Boris Johnson go now? Vote in our poll and join the debate in the comment section below.