Chaired by ITV’s Julie Etchingham, the debate saw Rishi Sunak, Penny Mordant, Liz Truss, Kemi Badenoch and Tom Tugendhat distance themselves from outgoing Prime Minister Boris Johnson, with none of the candidates willing to promise the embattled leader a role in Cabinet. The Tory leadership hopefuls all sought to present themselves as the trustworthy candidate, with promises of a fresh start to a political party mired in scandals and public mistrust.

In contrast to the live audience debate on Friday, Sunday night’s head-to-head saw all candidates more eager to go for the jugular, with accusations of “toxic politics” and personal barbs frequent.

Penny Mordaunt and Kemi Badenoch clashed on trans rights, while Liz Truss and Rishi Sunak hurled thinly-veiled insults at one another.

One particularly uncomfortable moment came when Mr Sunak asked Ms Truss: “What do you regret more, being a Liberal Democrat or voting for Brexit?”

Tom Tugendhat accused the entire Government of “collapsing trust like a concertina”, positioning himself as the only candidate able to restore public faith in the party, citing his military background as evidence of his leadership ability.

On Brexit, the candidates clashed too, with Ms Badenoch and Mr Tugendhat both saying it was time to move on from the issue, while Ms Mordaunt and Mr Sunak said they wanted to continue working to deliver on Brexit’s potential. 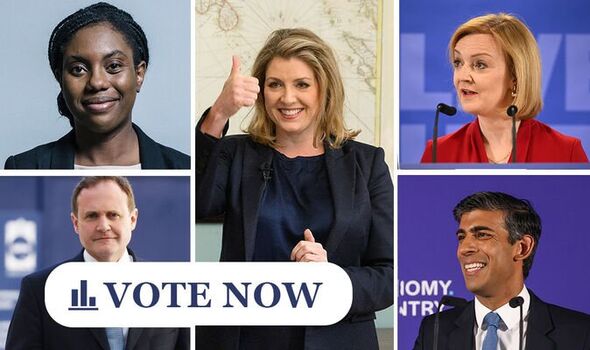 Ms Truss, who voted Remain, said she was the only candidate trusted on the issue of Brexit, saying she had put her “shoulder to wheel” to deliver trade deals.

In a poignant moment, none of the candidates said they wanted to hold an imminent general election, should they win the poll of Tory MPs and grassroots party members to take the top job.

Ms Badenoch said she was the “candidate of the future”, while Ms Mordaunt insisted she was the only candidate who could beat Labour.

Ms Truss was the only candidate who said she’d be willing to sit down with Putin. Mr Tugendhat said he was the only one offering the nation a “clean start”.

And Mr Sunak, currently the frontrunner in the polls, insisted that only he has the experience needed to realise Britain’s “limitless potential”.

The candidates will face another round of MP voting on Monday, as the pool is whittled down to two before heading to a postal ballot of the wider party.

So what do YOU think? Vote in the poll above and join the debate in the comments below. Results will be published on Monday morning.