Boris Johnson faced accusations of “buffoonery” in a fiery PMQs debate as the SNP’s Pete Wishart insisted the Prime Minister is unpopular in Scotland and support for independence from the UK is “at an all-time high”. But Mr Johnson hit out at Nicola Sturgeon’s high taxes and failure in education and health. He went on to accuse Mr Wishart of covering up the failures with the independence bid.

Speaking in the House of Commons, Mr Wishart asked: “What’s startling to me is why he is so singularly unpopular in Scotland.

“He’s lost half the Scottish MPs.

“Support for independence is at an all-time high.

“Is it because he thinks he can say no to a nation or is it because the blustering buffoonery just jars with the Scottish people?” 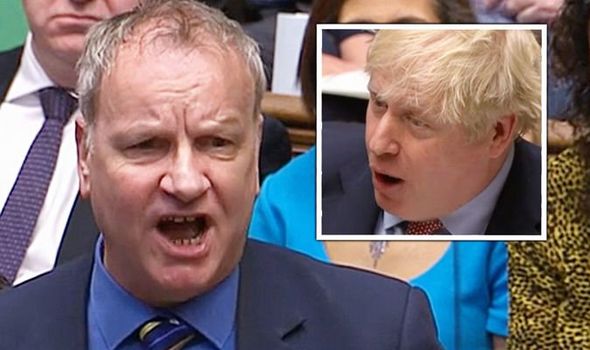 Mr Johnson responded: “I notice support for breaking up the union is actually declining in Scotland.

“And maybe that’s because they have a Scottish Nationalist Party in charge who has the highest taxes anywhere in the UK but it failing Scottish children in their schools and is not running the Scottish health service in the way that it should.

“Maybe his bluff and bluster are covering up for the abject failures of the SNP Government.

“Maybe Mr Speaker the Scottish nationalists should stick to the day job.”