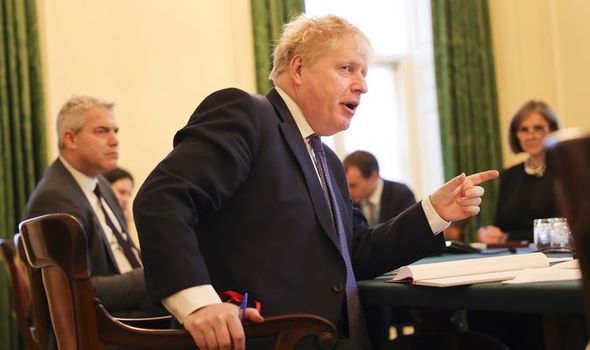 The Bury South MP’s defection was announced just minutes before Boris Johnson arrived in the Commons for Prime Minister’s questions. Mr Wakeford was branded a “hypocrite” and accused of “turning his back” on his constituents by Conservatives. Labour’s hard-left also reacted with fury and called for him to be “booted out” immediately. Mr Wakeford’s defection was timed to cause maximum damage as Mr Johnson faced the Commons after fevered speculation of an imminent putsch.

But Tory MP Andrew Rosindell said every Prime Minister goes through “bad patches” and the desertion would unite the party. He told GB News: “How you can stand as a Conservative and suddenly overnight become a Socialist? I don’t get that. I think what he has done is probably going to unite the party rather than divide it.”

Jake Berry, who chairs the Northern Research Group of Tories, said he felt “very sorry” for voters in Bury South. “I think Christian has made the wrong decision,” he said. Mr Berry added that his former colleague could have submitted a letter of no confidence in the PM if he wanted a new leader.

“That isn’t the same thing as turning your back on your constituents, who have backed the Prime Minister, they backed the Conservatives and they backed levelling up.” Mr Wakeford co-sponsored a private members’ bill that would let constituents force a by-election for MPs who cross the floor.

Constituent Richard Huntley, a 57-year-old insurance broker who lives in Prestwich, said Mr Wakeford should “give his constituents the opportunity to agree with him or vote him out. It’s just sheer arrogance to presume that, as an elected representative of the people, you can just change sides on the basis that you know best,” he said.

The left-wing Momentum campaign group said MrWakeford had “voted with this hard-right Tory Government almost 400 times in just two years. He should be nowhere near the Labour Party and the decision by Starmer to accept him is an insult to yea no LtSh th wo an the millions of working people who want to see a fairer country,” said a spokesman.

Mr Wakeford’s decision appeared to take the steam out of the socalled “pork pie plot” to oust Mr Johnson by disgruntled MPs from the 2019 intake. The rebels, allegedly led by Alicia Kearns, who represents Melton Mowbray, which is famous for its pies, went to ground yesterday.

Ms Kearns failed to take up her usual prominent spot in the Commons for PMQs. West Dorset’s Chris Loder, and Gary Sambrook, who won Birmingham Northfield by 1,640 votes in 2019, are also said to be involved.

Dehenna Davison, Conservative MP for Bishop Auckland, who is said to be another key figure in the plotting, denied she was planning to defect. Mr Wakeford, 37, was elected to Parliament in 2019 with a 402 majority and has been a vocal critic of the Labour party since, highlighting “many years of Labour neglect in the north”.