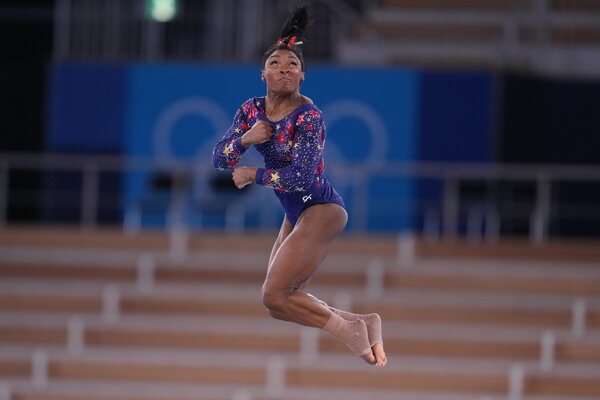 Simone Biles usually owns the floor exercise. She has been great in the event ever since she was very young, back when some people mistakenly thought she would end up to be a specialist on the floor and the vault — and never an all-arounder. Those naysayers are probably hiding in a corner now.

At the 2016 Rio de Janeiro Games, Biles’s signature move on the floor was a double layout with a half-twist and a blind landing, now officially known as “The Biles.” It was the first skill named after her because she was the first one to do it at the world championships or Olympics.

Since then, she has added “The Biles II” to her floor repertoire, and that’s a triple-twisting double-tucked backward somersault that you need to see in slow motion to count the flips and twists. It looks like she is being tossed around inside the eye of a hurricane. But in the end, like a cat, she somehow lands on her feet. In gymnastics, that quality is called air awareness and it’s one of Biles’s many athletic gifts.

She also has been working on her choreography since the last Olympics. In an effort to “spice it up,” she enlisted professional dancer Sasha Farber to help. He was her partner on “Dancing with the Stars,” and together they finished fourth in that TV competition. Here, though, Biles wants a gold medal, not a glittery mirrorball trophy.

She just performed both of her Biles moves, and landed both of them. But her third tumbling pass, a full twisting double back somersault, gave her trouble. While she landed it with both feet, her momentum caused her to fly out of bounds and even off the beige raised competition floor. It was one of her worst floor performances of the year, and even with her wildly difficult moves she received a score of 14.133.

The score placed her in second place so far, just behind Vanessa Ferrari of Italy, who has 14.166 points. The top eight finishers at the end of the day qualify for the event final next week.