It is not yet opening day. Therefore, the Los Angeles Dodgers remain on top of the world.

They are the defending World Series champions, and they are favored by oddsmakers to become the first team in two decades to win back-to-back titles. Success has become routine. The Dodgers have won their division for eight years running and have appeared in the World Series three of the past four seasons, a run that no other current team can touch.

While noting how difficult it is to slog through the regular season and prevail in the crucible of flukiness that is Major League Baseball’s playoffs, Dodgers executives remain cautiously optimistic they can win again. “I think we are poised as having as good of a chance as we have ever had,” Andrew Friedman, the team’s president of baseball operations, said from spring training last week.

The partners of Guggenheim Baseball Management, which bought the Dodgers in 2012, have figured out how to consistently win, for now at least. While Friedman stays up at night worrying about his bullpen and how to restock the farm system, the rest of the Dodgers’ front office has visions of transcending mere baseball.

But to do so they will have to create a new generation of baseball fans that go beyond the white boomer demographic that typifies the sport’s core audience — surveys regularly find that fans of baseball are older and whiter than fans of other sports — and attract loyalists across one of America’s most racially diverse cities, where Latinos, Asians and Black people make up more than two-thirds of the population.

The Dodgers proudly carry the legacy of Jackie Robinson, not to mention having reached broader audiences in the past thanks to the Fernandomania caused by Fernando Valenzuela in the 1980s and the worldwide attention spurred by Hideo Nomo in the 1990s. These days, even having Magic Johnson, the most popular man in Los Angeles, as one of the Dodgers’ owners might not be enough to captivate the diverse pop culture tastemakers who will dictate the next decades of cultural relevance.

While 2020 saw the Dodgers reach a pinnacle as team, Los Angeles has been hit hard by the coronavirus pandemic, both in terms of deaths and the economic toll of shutting down the theme park and movie businesses. The Dodgers have been central to the city’s efforts to combat the virus, feeding, testing and vaccinating hundreds of thousands of Angelenos at Dodger Stadium, which might, in turn, strengthen the team’s bond with its city. 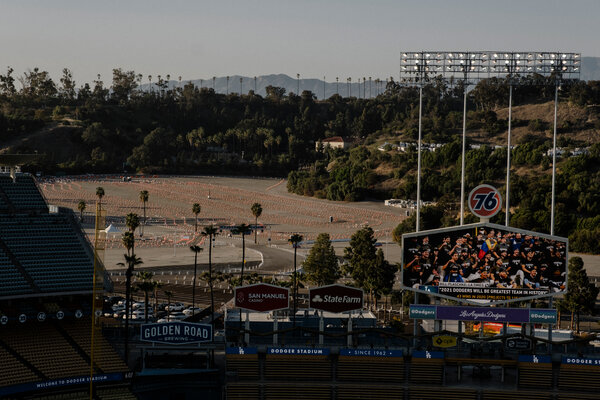 “We have a moral and social responsibility to have a strong community relations program, but also, it’s just good business,” said Stan Kasten, the team’s president and chief executive.

Financially, things are complicated. The Dodgers, like all other baseball teams, have lost money during the pandemic. Commissioner Rob Manfred has said teams collectively lost $3 billion last season, an average loss of $100 million for each team. But the higher you reach the farther you fall, and the Dodgers regularly lead baseball in attendance — they drew just under four million fans in 2019, nearly 500,000 more than any other team — and have one of the most lucrative television rights agreements, worth at least $7 billion over 25 years. Kasten would not reveal the amount the team lost during the 2020 season, but it is safe to say it was much more than $100 million.

Yet the Dodgers continue to invest in the team when so many of their competitors are looking for ways to cut costs.

A longtime executive with the Atlanta Braves and the Washington Nationals, Kasten helped lead the purchase of the Dodgers in 2012. Mark Walter, chief executive of Guggenheim Partners, is the controlling owner, and Peter Guber, Johnson, Billie Jean King and others all own parts of the team.

But Kasten is the central cog of the organization, and the recent financial losses haven’t changed things for an executive who spent the past nine years perfecting a three-part philosophy that he hopes will result in more World Series titles — and a Dodgers cap on every head in the world.

The product is the team, and a good product is a team that wins. That is the domain of Friedman, who was hired away from the Tampa Bay Rays in 2015.

With the Rays, Friedman focused exclusively on low- or zero-cost team-building strategies, likening himself to a specialist doctor. “We knew our limitations,” he said.

With the Dodgers, every team-building strategy is available to Friedman, which means he is expected to put a winning team on the field in perpetuity.

“There are a lot of large-market teams that have gone on a nice run, and then gotten to the end and fallen off a cliff,” he said. “It takes them three, five, six years to build back. We are trying the delicate balance of maximizing for current wins, while also keeping one eye on the future.”

So far he has done remarkably well. Many baseball teams in recent years — even the Boston Red Sox and the Yankees — have looked for ways to cut back on payroll, but not the Dodgers. They have kept their payroll among the highest in baseball, and have been willing to make moves like trading for the superstar Mookie Betts, knowing they would have to re-sign him to an astronomical contract, which they did, to the tune of $365 million.

But their payroll is not bloated with many expensive long-term contracts, and their farm system is regularly one of the best in baseball. Half of their World Series-winning roster was originally drafted or signed by the Dodgers, led by their ace, Clayton Kershaw, but also including key contributors like Corey Seager and Cody Bellinger.

Dave Roberts, the team’s manager, seems content with what he has to work with.

“It’s a very talented team,” he said. “That is an understatement.”

Kasten talks often about having visited Dodger Stadium on his honeymoon in the late 1970s. He jokes, or maybe he’s serious, that when Guggenheim bought the team, the original electric and plumbing from 1962 remained. Multiple renovations in recent years, including $100 million worth of upgrades completed during the pandemic, have rectified that. Dodger Stadium now has the amenities expected of modern ballparks, like a robust Wi-Fi network.

It also now has a two-acre “entertainment concourse” with a statue of Robinson (and one to come, of Sandy Koufax), with photos retelling the team’s history and plenty of backdrops for fan selfies. The concourse was supposed to be unveiled on opening day last year, but that day never came and the area won’t be used initially this season because of restrictions meant to discourage fans from congregating.

The team has finally corrected perhaps its biggest early mistake, which centered on its enormous television rights agreement with Time Warner Cable. The money was not the problem, exactly, but to recoup the $7 billion investment, Time Warner charged a high fee for the channel, which cable and satellite distributors did not want to pay. As a result, for many years fewer than half of Los Angeles households could watch Dodger games.

You cannot find new customers if they cannot watch the games, and Kasten is clearly still angry at the various media companies involved in the situation. Through a series of media mergers and new agreements, Kasten says the team’s games are now available in over 90 percent of Los Angeles homes.

“Brand” is an often nebulous and cliché term, but for the Dodgers it seems to mean regular people interacting with the organization. That can be the players — who in nonpandemic times were encouraged to sign autographs, and some once greeted fans at the stadium gates until it became too unruly — or the larger team, through its investment endeavors and community relations program.

When Nichol Whiteman, a veteran philanthropy executive, was hired as the chief executive of the Los Angeles Dodgers Foundation in 2013, the foundation’s focus was on developing softball and baseball fields in local underserved communities. The foundation had one other employee and had spent on its philanthropic efforts $9 million in the previous two decades.

Under her leadership, the Dodgers Foundation has invested $23 million in building and maintaining fields, developing underserved communities, homelessness and hunger relief, and social justice initiatives. (The foundation organizes and executes its own projects and also gives grants to other organizations.)

The money gets spent on building and maintaining ball fields as well as serving the families of the local youth who play on the fields with job training, college application counseling, fitness clinics and dental health screenings.

“We are not responsible for putting butts in the seats at Dodger Stadium,” Whiteman said, “but inherently and indirectly that occurs. It’s our job to let those who live in the shadows of Los Angeles know that they belong and are connected to the Dodgers.”

Achieving diverse representation in all aspects of the organization remains an aspiration. Amid a long-running drop in the number of Black pro baseball players, the undisputed star of the team, Betts, is Black, as is the manager, Roberts, one of two Black managers in the league. (He is also of Japanese descent.) The team also has a number of Latino players. The front office, where ownership and the decision makers sit, is much whiter, however.

But then there is Johnson, a key figure on the ownership team.

“What is really outstanding, and you hear it all the time, is that I’m sitting there,” Johnson said.

Asked how the team can attract the younger, diverse fans, executives like Kasten and Rosen pointed to the team’s community relations initiatives, but had less to say about how it plans to attract the middle-class and wealthy people of color who aren’t yet tuning into Dodger games or showing up at the stadium.

While the Dodgers will celebrate the team’s connection to agents of change like Robinson and Johnson, no one should expect the Dodgers to weigh in on divisive cultural and political battles, even as young consumers increasingly demand that brands reflect their values. In last summer’s protests for racial justice, the Dodgers saw a “bright line” that placed the issue squarely on the side of morality, not politics, Kasten said, but the organization will steer clear of any issue its sees as incendiary or political.

Tucker Kain, the Dodgers’ president of business enterprise, is in charge of using the Dodgers name and money to invest in technologies as prosaic as point-of-sale kiosks, and as newfangled as blockchain and nonfungible tokens. But central to the organization’s success is the investment in players. “We have to make sure we’re as competitive as possible on the field.” he said.

Johnson, through his time with the Lakers and the Dodgers, knows more than most about how Los Angeles sports franchises operate. He said the work to be done now, with the Dodgers’ first game of the season coming on Thursday against the Colorado Rockies, was to stay focused on the improved physical and economic health of the community and the continued health of the team’s athletes. That comes before discussions of World Series repeats.

“What we have to remember is we have 162 games to play first,” he said.