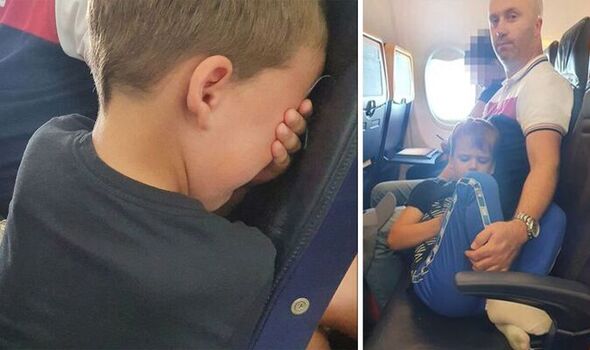 A little boy was left in tears after a passenger refused to move after Ryanair had double-booked the seat by mistake. Ryan Bandli was devastated after he wasn’t able to sit in his original window seat, which was specifically booked for him as it reportedly helps the six-year-old keep calm when flying.

The boy’s mum, Adi, had booked the specific spot on the Ryanair plane which was operated by the budget airline’s subsidiary Buzz.

She explained when they arrived on board, they found another woman sitting there.

The other passenger had an identical seat reservation and refused to move, so little Ryan was relocated to an aisle seat.

Her mum Adi, who said he struggles in stressful situations and especially on a plane, explained the flight attendant “begged” the woman to give the seat up.

Adi explained: “Ryan was really upset and anxious and he cried. He didn’t understand how this could happen.

“We sat separately and it was really stressful. How can something like this happen?”

She continued: “Ryan likes to sit next to the window. It calms him down a bit and he likes to lean his head against the wall.

“My poor child was crying. People gave him sweets and were so kind,” she told The Mirror.

Ryanair blamed the problem on an IT glitch and assured the seat was not sold twice.

The low-cost airline refunded Adi the reservation cost but she has now asked for compensation.

She claimed the airline rejected her request and explained the seat was given to someone else because it was by an emergency exit row.

Ryanair explained: “The CAA requires that UK airlines have procedures to ensure that customers are seated where, in the event that an emergency evacuation is required, they may best assist and not hinder evacuation from the aeroplane.

“Only those customers who appear reasonably fit, strong and able to assist the rapid evacuation of the aeroplane in an emergency should be allocated seats that permit direct access to emergency exits.”

Children are not “body-able passengers” and are not allowed to sit by the exit as they wouldn’t be able to help during an emergency.

Adi claimed, however, that the other passengers were not sat in an emergency exit row.

Talking about airline subsidiary Buzz, which operated that specific flight, Ryanair said: “This Buzz passenger’s seat was not sold twice.

“This misunderstanding was as a result of an isolated IT glitch.

“Unfortunately as the flight was fully booked, there were no other window seats available.

“Buzz regrets the inconvenience caused to Ms Bandli and her son and a member of our customer services team will contact them directly,” the carrier told The Mirror.