Pompeii and its neighbouring settlements were devastated by the eruption of Mount Vesuvius in 79AD, burying thousands of people and their homes under six feet of volcanic ash and pumice. But, news reached Rome in just a day and some survivors were able to evacuate, thanks to an astonishing network of roads built by the empire. Historian Dan Snow visited the city of Cuma, just a few miles from the worst-hit area, during his Channel 5 show “Pompeii: The New Revelations,” where he revealed the secrets of this genius system.

He said last month: “While the people of Stabiae could return to their town in the weeks after the eruption, the destruction of Pompeii and Herculaneum was too great.

“To discover what happened to the inhabitants who escaped those towns, we need to look at the area of the opposite side of Vesuvius, which survived relatively unscathed.

“Roman Naples is hidden under the modern city, but 10 miles west are the exposed ruins of Cuma, a city which was two-and-a-half times bigger than Pompeii.

“This is the road that leads from Pompeii in the south, through Cuma to Rome in the north, and it was along this road that the survivors traipsed – refugees beginning the process of rebuilding their shattered lives.” 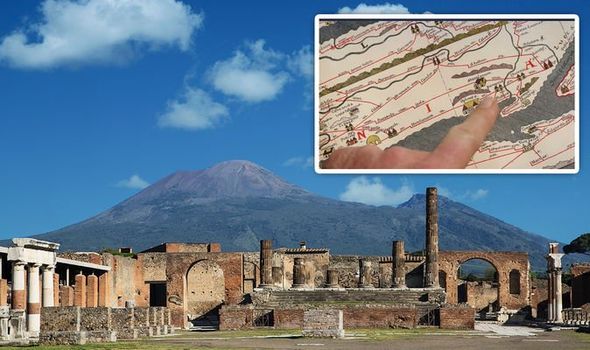 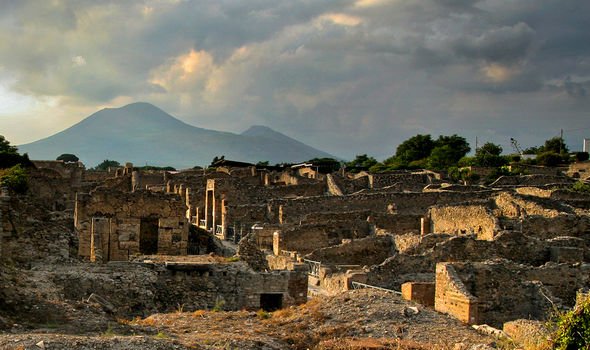 Mr Snow went on to detail how this network of roads can be seen on an ancient map.

He added: “It was also along this road that news of the disaster spread from Pompeii to Rome in less than a day, thanks to the remarkable Roman Imperial Postal Service – the cursus publicus.

“The postal networks spanned the empire and can be seen on an extraordinary map called the Tabula Peutingeriana.

“It was made in the 13th-century, but copied from an older Roman map, this is a reproduction of the six-metre-long original.

“What’s fascinating is the original version of this map must have been created before the eruption because Pompeii is on it, as is Herculaneum here. 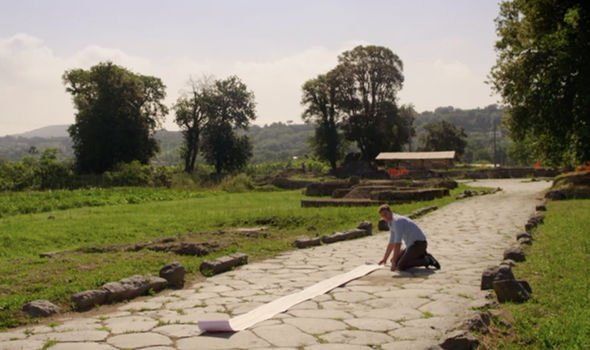 “By the medieval period, these towns were buried and long forgotten.”

The Roman Empire had a clever plan to move information quickly across different regions.

Mr Snow explained: “News of the eruption would have been sent by riders in a relay, around every 12 miles there were mansiones – places that supplied food and fresh horses.

“Riders carried laurel leaves if they had good news, but a feather on a spear indicated bad news requiring great haste.

“So when the eruption began, riders probably left Pompeii, galloped along this road here, passed through Cuma, changed horses, allowing them to speed north along this very road here and then join the Villa Appia, which like the big M1 of ancient Italy. 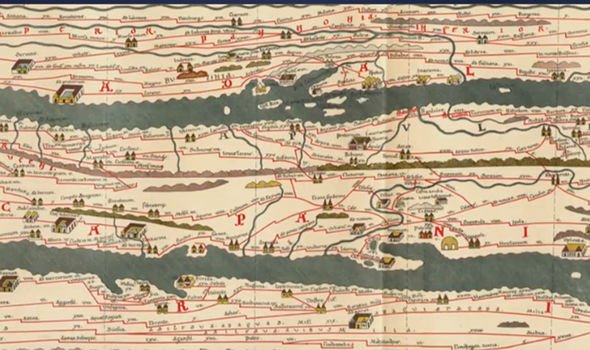 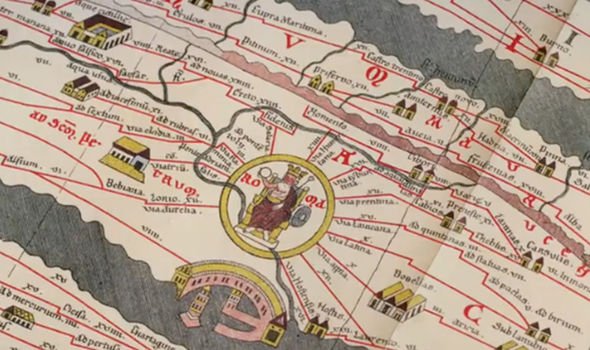 “And then, straight to Rome – where, as you’d expect – all roads lead.”

Mr Snow detailed how Emperor Titus called for relief to be sent back in the opposite direction.

He continued: “In Rome, the news would have been told first to Emperor Titus, he’d only been ruler for a few months when the disaster struck.

“The Roman historian Suetonius said that Titus showed not only the concern of an emperor, but the deep love of a father.

“He sent aid from the imperial coffers, and two senators down to oversee relief effort.

“He also visited the area twice in the year that followed himself, probably staying here in Cuma.”