Belarus President Alexander Lukashenko was on course for another landslide election victory on Sunday amid protests over his leadership.

State-approved exit polls by the Interfax news agency showed Mr Lukashenko winning 79.7% of the vote, while his main opponent Svetlana Tikhanovskaya, a former English teacher who emerged from obscurity a few weeks ago to lead rallies against him, received 6.8%.

The 65-year-old Mr Lukashenko, who has ruled for a quarter of a century, has struggled to contain demonstrations that pose the biggest challenge for him in years. 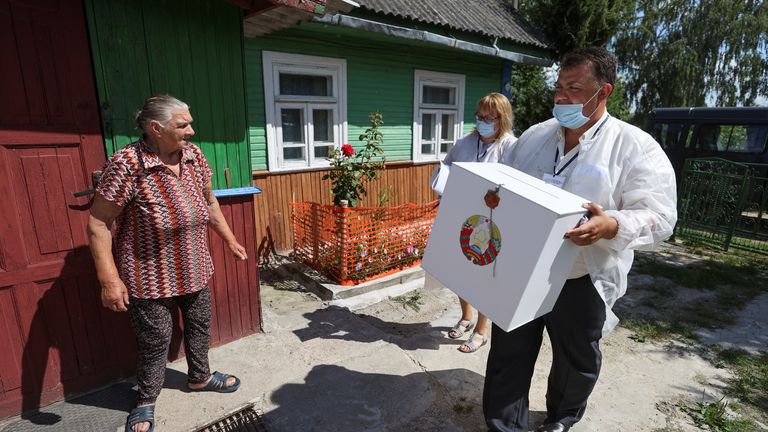 He has battled a wave of anger over his handling of the COVID-19 pandemic, the economy and his human rights record.

An electoral victory with roughly 80% of the vote for President Alexander Lukashenko, if the first state exit poll is anything to go by, is about as brazen as it gets.

It shows that old habits die hard for an autocrat not used to acknowledging the slow ebb of power.

No nod to the clear popularity of his opposition challengers in that result. No attempt to appease the tens of thousands across the country who came out to cheer Svetlana Tikhanovskaya and the trio of women promising change.

In Minsk, military vehicles are in place. The centre of the city is closed.

All around the country, internet services are struggling or down altogether. President Lukashenko has said that until now, his security services have been “light-handed” with protesters.

He has promised that, for those who “break the law” – and you can take that to mean anyone who takes to the streets – they will not be so forgiving.

Svetlana Tikhanovskaya, the lead candidate in a trio of women campaigning for a future without Lukashenko, supposedly only received a vote share in the single digits. The Chair of the Belarus Central Election Commission has recommended she take the defeat calmly and congratulate the winner.

Tikhanovskaya is calm by nature and never asked for the limelight thrust upon her after Lukashenko threw her activist husband in jail and she decided to run in his stead. But her supporters, who had dared to hope, may not be so calm.

Sky News was refused accreditation to cover the elections. We spent polling day outside the Belarusian embassy in Moscow.

Thousands of people were queuing to cast their vote. Queues stretched for miles around the building even as polls closed.

One woman said she had been waiting eight hours only for 8pm to strike when she was just metres from the entrance. She said she thought the election committee had made the voting process slow deliberately.

Nevertheless, the first exit poll from independent observers outside the embassy gave 70% to Tikhanovskaya. The real result probably lies somewhere in the middle. 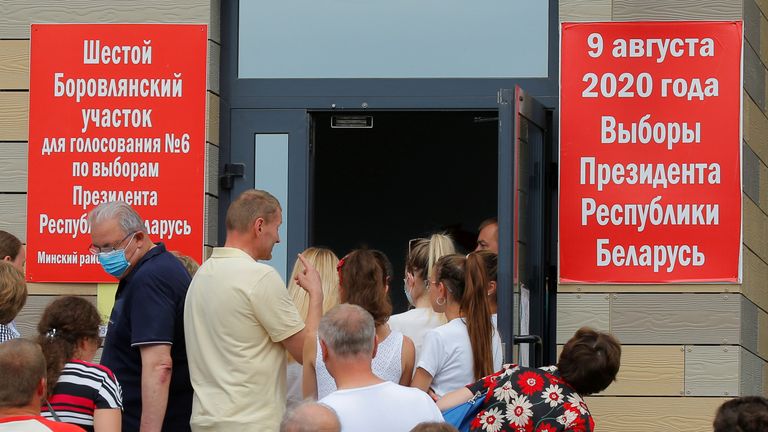 Lukashenko still has a robust power bloc around him who know that their bread is buttered better with him around.

But as one voter said to me today, “a line has been crossed”.

Do not expect revolution.

But discontent will make things increasingly uncomfortable for a leader glaringly out of touch with the wishes of his people.