Mahmoud Ahmadinejad said: “It is clear to the world that the mutated coronavirus was produced in lab, manufactured by the warfare stock houses of biological war belonging to world powers and that it constitutes a threat on humanity more destructive than the other weapons that target humanity.” Iran has a growing number of coronavirus cases and there is concern about how the government is responding. The country’s Supreme Leader, Ayatollah Ali Khamenei, has said the virus won’t impact the country for long and will disappear.

Ayatollah Ali Khamenei said: “I don’t want to say it’s unimportant but let’s not exaggerate, the coronavirus won’t affect the country for long and will leave.

“With the help of our colleagues in BBC Persian, we’ve been trying to piece together what is happening in Iran.”

The former leader posted a copy of a letter to UN Secretary-General Antonio Guterres on Monday.

In the letter, he claimed COVID-19 is “a new weapon for establishing and/or maintaining the political and economic upper hand in the global arena.” 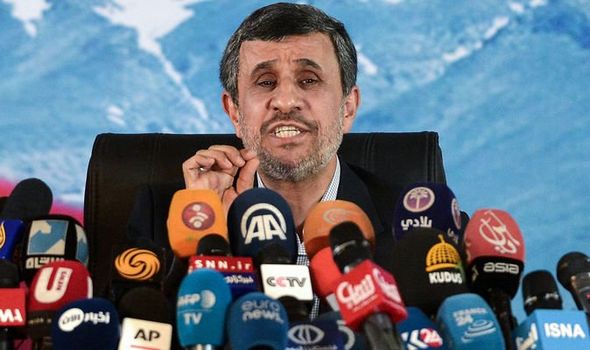 He went on to say the flulike illness, which has infected tens of thousands, was “produced in laboratories” by the “warfare stock houses of biologic war belonging to world hegemonic powers.”

Mr Ahmadinejad, who, during his tenure as president, promoted the destruction of Israel, said the illness was more destructive than nuclear and chemical weapons.

The coronavirus has particularly affected Iran, where more than 7,000 people have been infected and at least 237 have died.

However, that number has been disputed by academics and dissident groups who claimed there could be tens if not hundreds of thousands of cases.