More nations are announcing plans for a gradual lifting of restrictions designed to curb the spread of coronavirus. 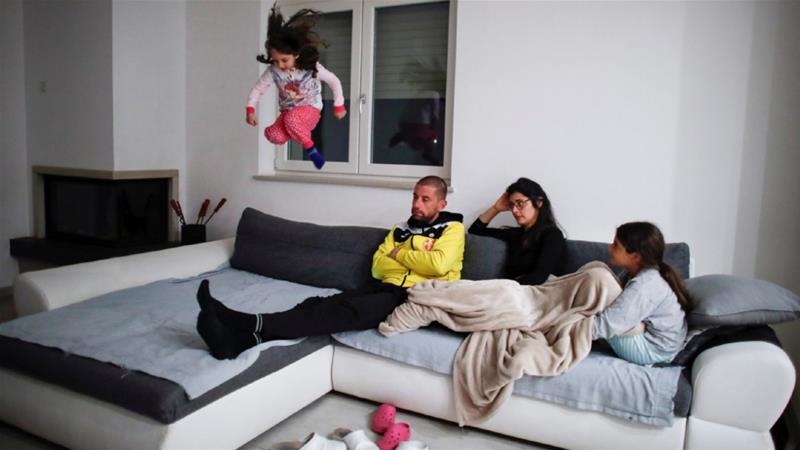 Several European nations are eyeing a gradual end to their coronavirus lockdowns as infection rates slow and death rates decline.

Spain is hoping for a return to relative normality by the end of June, said officials in Madrid, announcing a four-phase plan on Tuesday to lift one of the toughest set of restrictions as the daily death toll fell to 301, less than a third of a record high of 950 in early April. The official count of fatalities since the start of the outbreak rose to 23,822 on Tuesday.

Prime Minister Pedro Sanchez said a relaxation of rules would begin on May 4. While exact details will vary from province to province, hairdressers and other businesses that operate via appointment will open in the initial phase, while restaurants will be able to offer takeaway services.

Spain’s professional footballers and other top-flight athletes will also be able to resume training.

In the next stage, envisaged to begin on May 11 for most of Spain, bars will reopen their terraces but will be limited to a third of their capacity.

From this point, healthy people with no underlying medical conditions will be allowed to socialise together in small groups, while family members will be permitted to attend funerals.

Advancing through the stages will depend on factors such as how the rate of infection evolves, the number of intensive care beds available and compliance with social-distancing rules, Sanchez said, without providing concrete thresholds for how these measures would be evaluated.

“We are starting to glimpse an outcome that will be a reward for the huge collective effort made over the past weeks,” Sanchez said, warning the “virus is still lurking”.

In France, a new regime of coronavirus testing will be launched on May 11 so that it can slowly unwind its lockdown and avoid economic meltdown, Prime Minister Edouard Philippe said on Tuesday, warning that citizens have to be disciplined to avert a new outbreak.

The government has set itself a goal of carrying out at least 700,000 tests per week. Once a person tests positive, tracing would begin to identify, test and isolate all those who had been in close contact with the individual, Philippe said.

“When we end the lockdown, we will have the capacity to massively scale up testing,” he said in an address to parliament, defending the government’s handling of the crisis.

However, he warned that the infection rate would spiral if France moved too swiftly and people became complacent.

“We are on a knife’s edge. I am having to choose between bad decisions,” he said, shortly before parliament voted in favour of his plans.

“We must protect the French people without paralysing France to the point that it collapses. A little too much carefreeness and the epidemic takes off again. Too much prudence and the whole country buckles.”

From May 11, schools will gradually reopen and businesses will be free to resume operations, Philippe said. Restaurants, cafes and beaches, though, will remain closed until at least June, while professional sports are suspended until September.

The government-released figures are thought to lag behind the true death tolls in several countries due to variations in reporting those who have died in hospital or elsewhere in the community, notably in nursing homes for the elderly.

President Vladimir Putin extended coronavirus lockdown measures for another two weeks on Tuesday, while ordering his government to begin preparations for a gradual lifting of the curbs from mid-May.

The worst days of the outbreak were still ahead, he warned Russia’s 85 regional heads via a video-conference call.

The number of new cases in Russia rose by a record 6,411 on Tuesday, bringing its official nationwide tally to 93,558. The number of deaths rose by 72, also a daily record, taking the total number of fatalities to 867.

He ordered his government to prepare guidelines for the gradual easing of curbs from May 12 and to deliver a fresh emergency economic-support plan, the third so far, to soften the impact of the virus. He did not provide details.

Greece is looking to implement a similar timetable to Spain’s, with Prime Minister Kyriakos Mitsotakis saying on Tuesday that restrictions on citizens’ movements would be lifted and more shops allowed to reopen from May 4.

Greece has so far registered 2,566 coronavirus cases including 138 deaths, much fewer than many other European nations, thanks partly to the swift imposition of its lockdown on March 23.

But the lockdown has paralysed an economy that only emerged in the northern summer of 2018 from a decade-long debt crisis, dashing expectations for strong growth this year. The government now expects a deep recession of up to 10 percent of national output.

“This is not the epilogue of our adventure but the continuation. Our emergence from quarantine will be done step by step. No one can rule out the risk of the threat rekindling,” Mitsotakis said in a televised address.

“A return [to normal life] must not lead to a relapse.”

Some retail stores, including bookshops and hair salons, will reopen on May 4 and others later in the month. Schools will open gradually, starting on May 11.

Year-round hotels, restaurants, cafes and shopping malls will reopen on June 1, but social-distancing rules will apply and staff will have to wear masks.

The government said it would provide more details later on how it plans to revive the tourism sector, which employs one in five workers in Greece. Last year tourism revenues totalled 18 billion euros ($19.5bn) on the back of more than 34 million visitors.

Across the rest of the continent, Germany’s central government has urged its regional administrations to “be careful” in their reopening of businesses and social facilities, while Italian Prime Minister Guiseppe Conte was forced on Tuesday to defend his “slowly slowly” approach to lifting restrictions.

The UK is next due to announce to the results of its continuing three-weekly lockdown review on May 7. On April 27, returning to work having won his own personal fight with coronavirus, Prime Minister Boris Johnson said it was impossible to say “how fast or slow or even when” any lifting of the country’s lockdown could begin.