The UK will be locked in the path of Arctic winds by a stubborn weather system strengthened by an ex-hurricane. 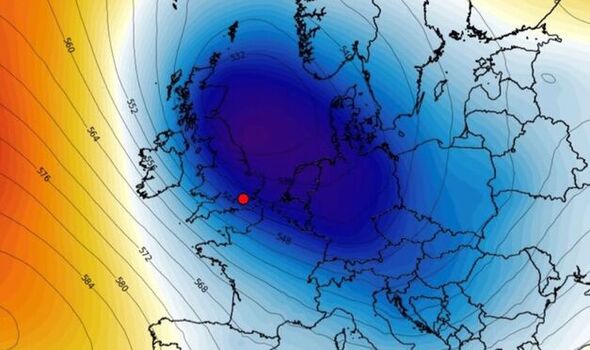 A northerly airflow setting in on Sunday will bring a windchills of -3C as the nation braces for the “coldest spell of the season so far”.

The Highlands Scotland face the first proper snow of the season while much of the UK wraps up for the risk of frost.

The cold plunge is blamed on a deep low-pressure system spiralling towards Britain from Iceland and ex-Hurricane Fiona bolstering high pressure in the Atlantic.

Jim Dale, meteorologist for British Weather Services, said: “The cold weather will set in at the end of the weekend and looks like it isn’t going anywhere quickly. It is looking cold through next week and possibly into next weekend, with the risk of fresh snowfall over the mountains.

“However, even further south, the cold is going to be very noticeable, and there could even be the risk of the odd frost. It is fair to say the seasons are about to make a dramatic transition to something much colder.”

Driving the cold snap from Monday will be the remains of Hurricane Fiona, which threaten to “squeeze a lobe of cold air” over the UK. 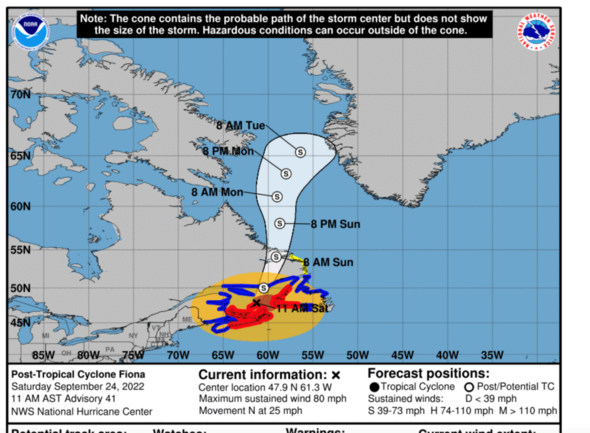 Rain and chilly winds will follow as snow falls over the Scottish mountains and frost hits widely around Britain.

A “bundle of warmth” left in the Atlantic from Hurricane Fiona will drive cold weather over the UK, according to Weathertrending meteorologist John Hammond.

He said: “As Hurricane Fiona surges out of the tropics, this weekend it looks like sending its bundle of remnant warmth as far north as Greenland.

“The downstream effect will be to squeeze a lobe of cold air out of the Arctic and across the UK early next week.

“A band of rain will sweep southwards early on Monday, and blustery winds and suppressed temperatures will characterise the first half of the week.

“The Scottish peaks can expect to see some snowfall, and more widely across the country, pockets of frost are possible in rural areas if winds fall light overnight.” 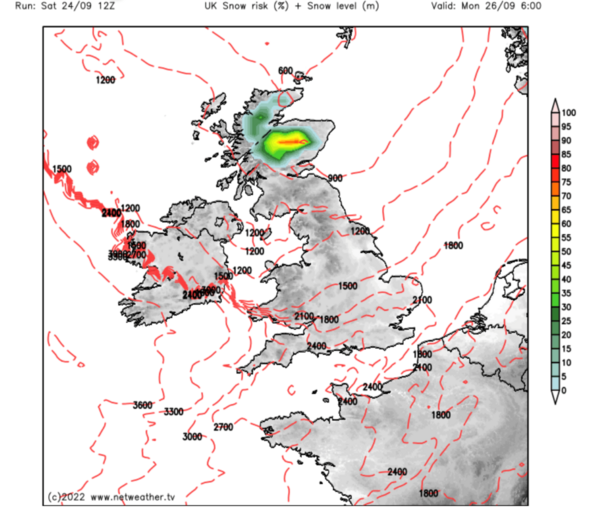 Daytime temperatures next week will drop widely into single figures with highs in the low- to mid-teens. Weather models for the start of the week reveal a high risk of snow over the Highlands of Scotland.

As northerly winds pick up, rain will hit parts of the country driven by chilly gusts, according to the Met Office.

Meteorologist Aidan McGivern said: “At the start of next week, an active band of rain moves south with gusty winds and then we are into a cold plunge.

“It will be the coldest spell of the season so far, and it is certainly going to feel cold first thing with a touch of frost in the north and a chilly wind.

“Widely across the UK temperatures will be below average for the second half of the weekend and into Monday and Tuesday.”

Ex-hurricane Fiona will strengthen a huge high-pressure system in the mid-Atlantic, steering cold air into Britain, he added. 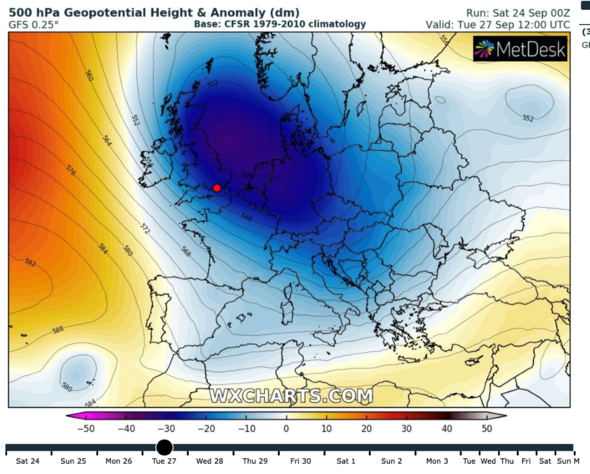 He said: “There are a couple of areas of low pressure, one which is ex hurricane Fiona.

“Both will push warmth northwards and help to build a large area of high pressure in the mid-Atlantic which in turn helps to push cold air across the UK.”

A battle between this high pressure and a low-pressure cyclone to the east of the UK will drive the cold snap.

A bubble of freezing Arctic air about to fall over Britain from the North Pole will refuse to budge through next week.

Mr Dale, author of Weather Or Not? said: “There is high pressure to the west, amplified by ex-Hurricane Fiona, and another low to the east.

“This will feed a mass of cold air over the UK, and that will stay in situ through the week. It will be very difficult to shift. It is time to put away the T-shirts and get out the winter coats.”