Cases across the world continue to surge after WHO stresses virus is ‘public enemy number one’. 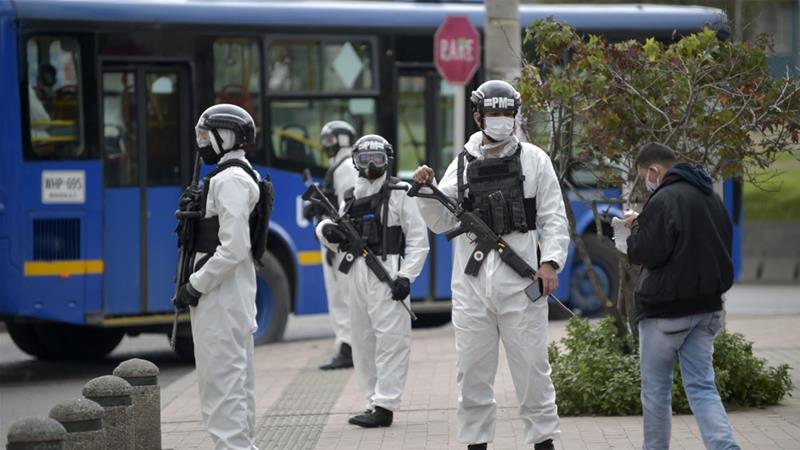 Here are the latest updates.

02:30 GMT – Mystery of Argentine sailors who caught virus while at sea

Argentina is trying to solve the mystery of how 57 sailors managed to come down with the coronavirus while they were at sea even though all had tested negative and spent 14 days in quarantine in a hotel before the voyage began.

The health ministry for the southern province of Tierra del Fuego says the fishing trawler is now back in port after 35 days at sea, with 57 of the 61 crew diagnosed with the virus after a new test. Two are now in hospital.

A team is trying to establish the “chronology of contagion” among the crew.

“This is a case that escapes all description in publications because an incubation period this long has not been described anywhere,” said Leandro Ballatore, the head of the infectious diseases department at Ushuaia Regional Hospital. “We cannot yet explain how the symptoms appeared.”

01:25 GMT – No new cases confirmed in Beijing for eighth day

The wave of coronavirus cases connected with Beijing’s wholesale market that began in June appears to have been brought under control with no new cases of the disease reported in the Chinese capital for eight successive days.

China’s National Health Commission reported five new cases on the mainland on Tuesday, all among people returning from overseas.

#Beijing sees zero locally transmitted #COVID19 cases for the eighth consecutive day. On Monday, 21 people recovered and were discharged from hospitals, lowering the number of active cases in Beijing to 205. pic.twitter.com/W5fNQkEsWe

More than 930 people working for four private companies that run detention centres for US immigration have tested positive for coronavirus, according to executives speaking at a congressional hearing.

The four firms are CoreCivic (554 cases), the GEO Group (167 cases), Management & Training Corp (73 cases) and LaSalle Corrections (144 cases). US immigration has reported 45 cases amongst its own staff.

Lawmakers are concerned about the spread of the virus across the US’ nearly 70 detention centres. More than 3,000 detainees have tested positive for the disease and two have died. There are currently about 22,580 people in immigration custody.

The British government will announce on Tuesday that people will have to wear masks when they go into a shop from July 24.

“There is growing evidence that wearing a face covering in an enclosed space helps protect individuals and those around them from coronavirus,” a statement from the prime minister’s office said.

Masks have been required on public transport since June 15.

More than 13 million people around the world have now been confirmed to have had the coronavirus, according to data compiled by Johns Hopkins University.

Below are the five most-affected countries.

Read all the updates from yesterday (July 13) here.