Over the next month, people in camps will only be allowed to exit at certain hours and in small groups to get food. 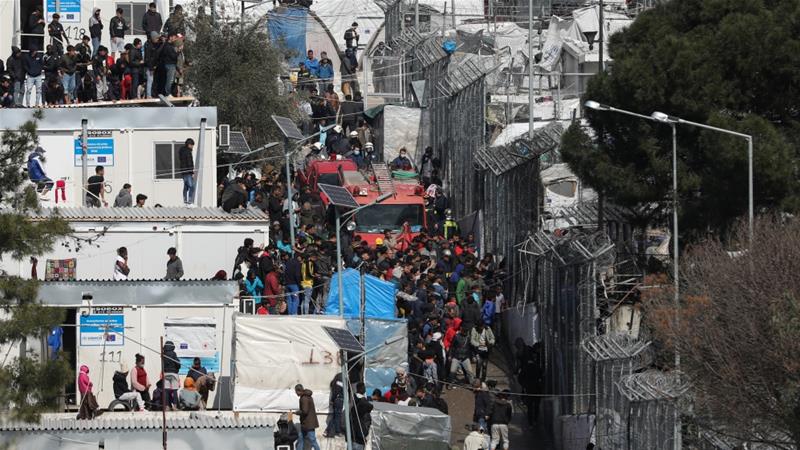 Greece has imposed restrictions on the movement of refugees and migrants living in overcrowded camps on its islands to prevent the spread of the coronavirus.

Over the next 30 days, people living in camps will be allowed to temporarily exit the facilities only in small groups, every hour between 7am and 7pm (05:00-17:00 GMT), to obtain food and supplies from nearby towns and villages, the migration ministry said on Wednesday.

Only one person from each family will be allowed to leave the camps.

Greece had already banned new arrivals at camps since March 1.

Refugees and migrants who reached its shores after that date will be transferred to the mainland in the coming days. Visitors are not allowed in, either, the ministry said.

Greece has so far registered five deaths and has confirmed 387 cases of COVID-19, including one on the island of Lesbos, where the overcrowded Moria camp operates.

So far, there have been no infection cases at any of the camps, the ministry said.

“Protecting public health at any cost, for the benefit of residents on the islands and in camps, is our priority,” Migration Minister Notis Mitarachi said.

More than 40,000 asylum seekers are living in centres for refugees and migrants on five Aegean islands.

The conservative government, which came to power in July on promises to be tougher on migration, wants to replace all existing camps on the islands with new detention centres.

Camps on the islands of Leros and Kos will be turned immediately into closed-type facilities, where entry and exit will be limited, the ministry said. The new centre on the island of Samos will be smaller in size than initially planned, it added, in order to speed up its construction.

Last week, medical charity Doctors Without Borders (Medecins Sans Frontieres, or MSF) urged Greece to immediately evacuate refugees and migrants from the camps due to a high risk of the coronavirus spreading swiftly among people living in overcrowded and squalid conditions.

Meanwhile, clashes broke out on Greece’s border with Turkey before dawn on Wednesday, after about 500 refugees and migrants attempted to break down a border fence and enter Greece.

An estimated 2,000 refugees and migrants are still camped out on the Greek-Turkish border, weeks after Turkey declared its borders to Europe open and encouraged hopeful asylum seekers living in the country to try crossing into European Union member Greece.