The three-time chief minister was detained along with about 1,000 others following revocation of Kashmir’s autonomy. 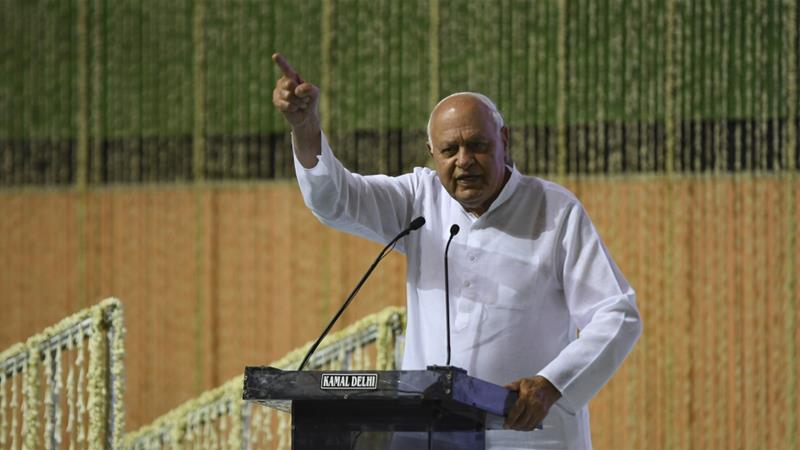 The 82-year-old leader is among the top mainstream leaders, a three-time chief minister and sitting parliamentarian, who was detained on August 5 when the Himalayan region was put under a strict military and communication lockdown hours before the Article 370, which granted the disputed region a measure of autonomy, was removed.

“I am free today. Now, I will be able to go to Delhi and attend Parliament and speak for you all,” Abdullah said while addressing reporters from his house where he was flanked by his family.

Abdullah said he was grateful to the people “who spoke for our freedom”.

“This freedom will be complete when all leaders are released. I hope the government of India will take action to release everyone,” he added. He, however, refused to answer any political questions.

The revocation of Abdullah’s detention order under Public Safety Act (PSA), a law under which a person can be detained for up to two years without bail, was issued on Friday by Shaleen Kabra, Kashmir’s principal home secretary.

An official source told Al Jazeera that one of the reasons to release Abdullah, who is in his 80s, was his health situation. The official said Abdullah went through an eye surgery two weeks ago.

“Being in an advanced stage of life he was not keeping well,” the official said.

After the abrogation of Article 370, a law that had protected the demography of the Muslim-majority region, the Indian authorities launched a massive crackdown and detained political leaders, separatists and thousands of others.

While most of the people, including some political leaders have been released, many continue to be in detention, including two former Chief Ministers Omar Abdullah and Mehbooba Mufti.

Farooq Abdullah, who often termed Article 370 a “matter of honour” for the Kashmiris, was on September 15 booked under the PSA, a law that has been termed “lawless” by rights groups like Amnesty International.

Farooq is the son of Sheikh Mohammad Abdullah – Kashmir’s tallest leader. The Abdullah family has dominated the National Conference, the largest mainstream political party in Kashmir that has ruled most of the last 70 years in the region.

In a statement, the National Conference, said, “Abdullah’s release from detention will be a right step for the restoration of a genuine political process in Jammu and Kashmir“.

“The process will receive a further fillip when party leader Omar Abdullah and other political detainees are set free. We urge the government to do so at the earliest,” it said.

Earlier this month, the government restored full internet services since it was banned in August.