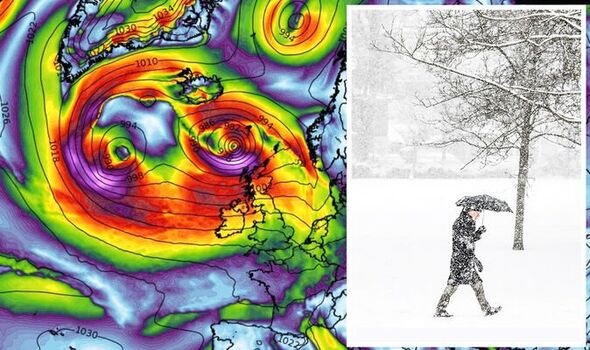 Freezing winds will scour the country ahead of the weekend as forecasters warn to brace for wintry downpours.

Cold weather will be driven by “cyclonic” low-pressure systems barrelling towards Britain from the Atlantic.

Exacta Weather forecaster James Madden said: “Despite the settled start to the week, it is going to turn much stormier as we head to the weekend, with gales and torrential rain on the cards for many areas.

“Several intense areas of low pressure will develop across northern and southern regions, and conditions will be right for the first significant snow of the season.

“This will arrive across higher ground in the far north of the country during the weekend and into the early part of next week.

“There may even be the odd flurry to lower regions during this period as we get ready for the first wintry blast of the season.”

Government forecasters have urged Britons to make the most of settled conditions through the start of the week.

The weather will take a turn for the worse on Wednesday as low pressure­­ “cyclones” sweep Britain.

Torrential rain and strong winds ahead of the weekend will be powered by a supercharged jet stream before temperatures tumble.

Met Office meteorologist Aidan McGivern said: “Two areas of low-pressure and an active jet stream is waiting in the wings.

“With all these different features interacting with each other there will be some uncertainty in terms of the details for later this week.

“The overall theme of the forecast is pretty evident, with low pressure towards the northwest of the UK at the end of this week with some wet and windy weather and quite a number of showers.”

As yet, no weather warnings have been issued for this week and no storms have been named.

A tangle of weather fronts will be dragged into Britain by low-pressure as it spirals in from the Atlantic.

Torrential rain will bring the risk of flooding to parts of the country while exposed regions could get damaging winds.

Weather models for this weekend show 60mph gusts whipping around the tail of a deep storm system as it lashes the UK.

Jim Dale, meteorologist for British Weather Services, said: “There is a low-pressure system to the north of Scotland and associated fronts with this low that will bring some unsettled and potentially very windy conditions to the UK towards the end of the week.

“A secondary low will break off from this and affect the UK’s weather on Sunday.

“A consideration will be heavy rain which could cause issues of flooding in parts of the country, and a good deal of that wet weather will be to the northwest, with some reaching the southwest.”

After the storm hammering, a blast of cold air will send temperatures nosediving, he added.

He said: “Behind bands of unsettled weather coming in this week will be colder air.

“It looks like it will turn colder towards the end of the week or the weekend.”

The chilly forecast has prompted bookmaker Coral to slash the odds on October snow hitting a major city.

Spokesman John Hill said: “With temperatures dropping fast, it does not look like snow is far away. We make it odds-on for the white stuff to fall in any major city in the UK this month.

“Those dreaming of a White Christmas this year may also get their wish granted, as the betting points to snow on the big day.”