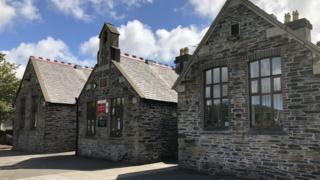 A Manx Gaelic primary school will become the first of its kind to be wholly run by the Isle of Man government in September.

A spokesman hailed the move as as a “significant moment” for the resurgent Manx language.

Bunscoill Ghaelgagh is the only school on the Isle of Man to teach lessons through Gaelic.

Education minister Alex Allinson said the school had been an “intrinsic part of the Manx language revival”.

The change means teachers will be directly employed by the government and the school will be able to access services provided by the education department, such as special needs provision.

The work of the school had helped people better appreciate the importance of island culture and made Manx “a living language again”, Mr Allinson added.

Educational charity Mooinjer Veggey currently runs the school under a contract with the education department, which is due to expire at the end of the academic year.

Following a consultation with parents, it was decided the department would take up the management of the school.

Manx organisation Culture Vannin said the move was another sign the language was flourishing on the island.

Mooinjer Veggey director Phil Gawne said the school had helped about 170 pupils become fluent in Manx and “radically transformed the fortunes” of the language.

After falling dramatically from the end of the 19th century, the number of Manx speakers has increased since the 1990s and the 2011 census recorded more than 1,800 speakers on the island.

Established in 2001, Bunscoill Ghaelgagh has grown from nine pupils and sharing premises to having its own facility in St John’s and about 70 students.

Related posts:
Top News
Gordon Ramsay lookalike says he’s always asked to swear at people
Huge brawl outside Wetherspoons as 30 men batter each other with broom handles
Afghanistan: Dozens reported dead in airstrikes on Taliban base amid peace talks
Motorcyclist dies after car crash in Aurora
NHS worker hacked to death by machete-wielding ex in front of neighbours
Recent Posts
This website uses cookies to improve your user experience and to provide you with advertisements that are relevant to your interests. By continuing to browse the site you are agreeing to our use of cookies.Ok