More than 70 migrants jumped overboard on a rescue ship while awaiting for permission to dock in southern Italy, according to a charity.

Open Arms, a Spanish charity, said the migrants jumped into the sea out of frustration after learning that permission to enter Malta had been refused.

They were rescued on Wednesday by Italian authorities off the coast of Palermo, southern Sicily.

The search-and-rescue ship picked up three separate groups during attempts to cross the Mediterranean in small boats last week, and had around 280 migrants and refugees on board.

Following the incident, the ship then headed towards Palermo, awaiting instructions on where to disembark the passengers.

The Italian coast guard has transferred two pregnant women, and one of their husbands, on to dry land for medical assistance while the rest remain on board.

Evarist Bartolo, Maltese foreign minister, said the small island is unable to take in any more migrants and refugees, and that it’s up to the EU to implement a system for those rescued by charities or merchant ships.

On Monday, Italy allowed 27 migrants to be brought to land after they spent around 40 days on a Danish tanker which rescued them when their vessel sank in the Mediterranean. 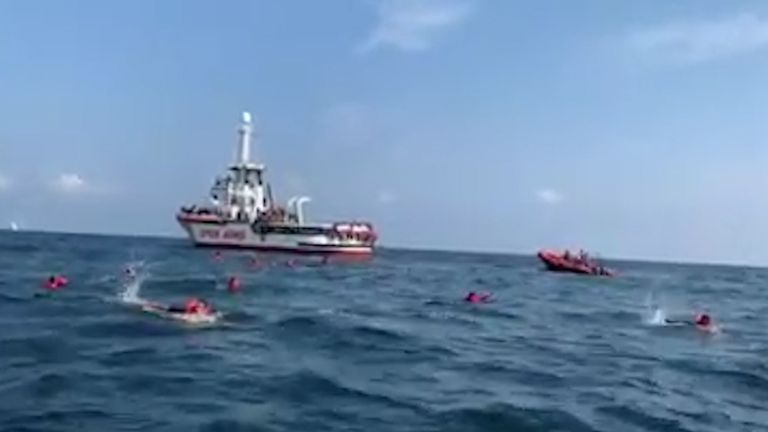 In Greece, there’s a police operation to move thousands of migrants and refugees into a new temporary camp after a fire destroyed their overcrowded one on the island of Lesbos.

More than 12,000 people were left in need of emergency shelter, food and water after the blaze, thought to be started by migrants, broke out last week.

The new camp is ready to take in at least 5,000 people, however on Wednesday only 1,200 had relocated.

In a statement, the police said: “This is an operation for the protection of public health and with a clear humanitarian mission.”

Humanitarian groups have criticised the European Union, arguing it is abandoning migrants who try to make the dangerous sea crossing from North Africa.