The explosion was triggered when a truck hit gas bottles stacked up in a gas processing plant near a pipeline in Lagos. 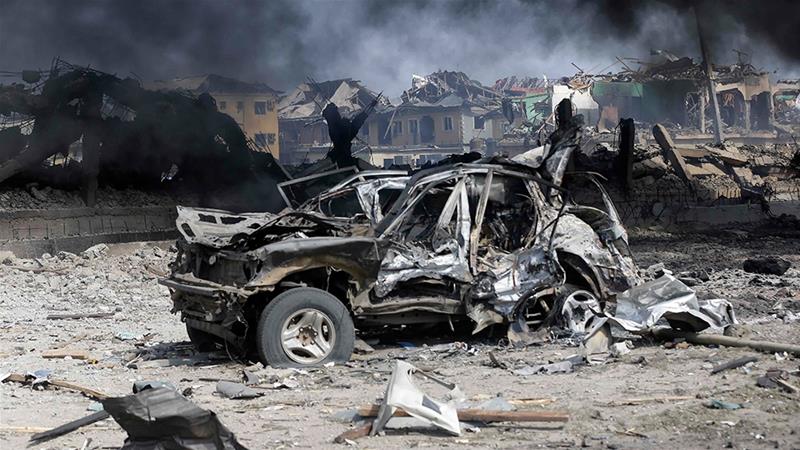 Rescue efforts are ongoing in Nigeria’s commercial capital, Lagos, after a gas pipeline exploded on Sunday, resulting in the death of at least 17 people.

A spokesman for the National Emergency Management Agency, Ibrahim Farinloye, said more than 100 houses had caught fire and many people were wounded. Lorries, cars and motorbikes were also destroyed by the blast.

Farinloye said the explosion was triggered when a truck hit gas bottles stacked up in a gas processing plant near a pipeline in Abule-Ado area of Lagos.

“We are recovering dead bodies as we speak and putting them in bags,” said local Red Cross official Adebola Kolawale. “We have a school here, and it’s a residential area. And we have a trade fair here as well.

As a crowd looked on, rescue workers sought to remove rubble from a girls boarding school attended by more than 250 pupils.

The school headmaster was killed in the explosion, as were a couple and their two sons who lived nearby.

The explosion’s impact was so strong it led to “the collapse of nearby houses and damage to a pipeline”, according to the Nigerian National Petroleum Corporation.

President Muhammadu Buhari, in a statement on Sunday, described the incident as a national tragedy. He sent condolences to the families of the victims and Lagos state.

Petrol tanker and pipeline blasts are common in Nigeria where, despite the country’s multibillion-dollar oil and gas industry, most people live in poverty.

Fires and explosions often occur as people try to siphon fuel from pipelines and as a result of accidents involving fuel tankers on poorly maintained roads.

In July, at least 45 people were killed and more than 100 others injured in central Nigeria when a crashed petrol tanker exploded as people gathered around to siphon fuel from it.

The truck overturned close to shops as it was travelling through the village of Ahumbe in Benue state.