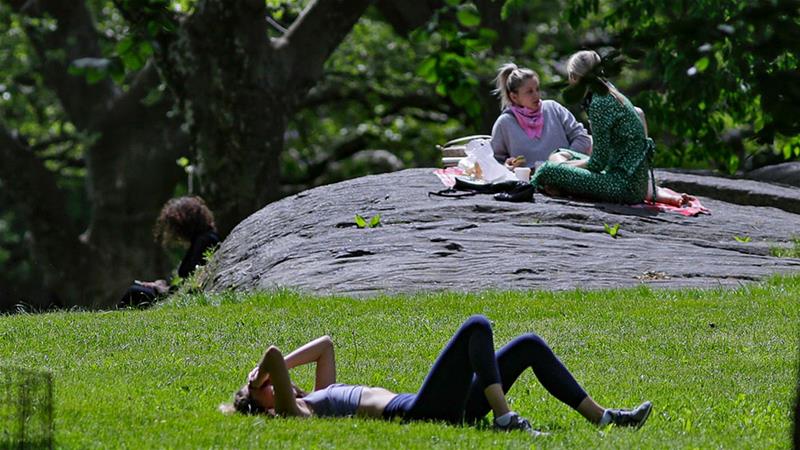 The most populous city in the United States has announced plans for a phased reopening as the coronavirus continues to spread throughout the country.

New York City Mayor Bill de Blasio on Thursday outlined what the first phase of a gradual reopening will look like in the most populous US city, and said he expected between 200,000 and 400,000 people to head back to work during that phase.

De Blasio said he expected the first phase of reopening to be announced in the first or second week of June and it would include four business sectors: construction, manufacturing, wholesale suppliers and non-essential retail.

“That’s four whole parts of our economy, manufacturing, construction, wholesale, and parts of retail that haven’t been opened yet again with restrictions,” de Blasio said at his daily news briefing.

“We’re now actually in a position to start talking about opening things up, step by step, phase by phase,” he continued.

Next week, the city will launch a series of initiatives to help businesses navigate reopening, including industry guides and a “business restart hotline”, the mayor said.

Authorities will monitor business compliance with reopening guidance by conducting random visits, and de Blasio said violators will be subject to the summons in “egregious circumstances”.

New York has been the epicentre of the US coronavirus outbreak, although the Navajo Nation has a higher per capita infection rate, according to Navajo authorities.

Deaths in the US passed 100,000 on Wednesday, according to a Johns Hopkins University tally.

New York Governor Andrew Cuomo said more efforts are needed before the city reopens. Public transportation must be thoroughly and routinely disinfected and contact tracing must be improved, according to Cuomo.

More attention must be paid to the “hotspots” inside the city, which typically include areas with higher populations of lower-income and minority residents.

“Because if you look at New York City, there are very different stories within the city,” Cuomo said.

Earlier this week, California moved to further relax its coronavirus restrictions and help the battered economy.

Retail shops and offices were allowed to open on Wednesday and the largest Roman Catholic archdiocese in the US announced a plan to resume services as Los Angeles County took another step towards a reopening that seemed hard to imagine a week ago.

Los Angeles, which has been proceeding more cautiously because of a disproportionately large share of California’s coronavirus cases, moved ahead after Governor Gavin Newsom relaxed statewide rules on Monday to allow worship and shopping to resume with restrictions.

San Francisco and other Bay Area counties, which have had more success curbing the spread of the virus than LA, have yet to take those steps out of an abundance of caution. Santa Clara County health officer Sara Cody, who led others in issuing a stay-at-home order, even criticised the governor for relaxing rules too rapidly before they could determine if incremental reopenings led to a resurgence of infections.

California is in the second step of a four-stage reopening process after leading the country to close businesses and lock down residents in March.

The reopening is being phased in by county and business sector. Some statewide commerce is allowed, including curb-side retail sales and limited in-store shopping, manufacturing and office work. Some counties were permitted to open limited dine-in restaurant service, barbershops and hair salons.