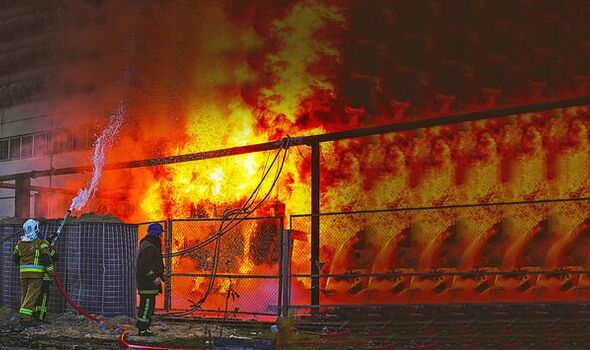 As the onslaught continued – with strikes in Kyiv, the northern city of Zhytomyr and the southern port Mykolaiv – President Volodymyr Zelensky said the bombardment was devastating the energy network.

And he revealed that the bombing campaign – which began days after Russian President Vladimir Putin claimed no more heavy attacks were needed – had destroyed some 30 percent of Ukraine’s power stations since October 10.

Western officials said Russia was attempting to destroy Ukraine’s entire electricity network but its efforts are being hampered by a shortage of high-precision, long-range missiles.

Mr Zelensky added on Twitter that there was “no space left for negotiations with Putin’s regime”.

His remarks came after the two sides completed one of the biggest prisoner swaps so far, exchanging 108 Ukrainian women for 110 Russian captives, mostly sailors.

He said: “The more Russian prisoners we have, the sooner we will be able to free our heroes. Every Ukrainian soldier, every front-line commander should remember this.”

Officials on both sides said that of the Ukrainian women returned, 37 of them had been at the siege of the Azovstal steel works in Mariupol in May.