Many farmers in Ukraine have spoken out about the dangers of landmines and unexploded shells as well as the imminent threat of a missile strike as they continue to harvest their “deadly crop”. In May, it was estimated that 10million hectares of farmland, which makes up a third of Ukraine’s total farmland, has been forced to stop production following occupation or the ruins of military equipment.

Journalist Ivan Watson from CNN noted the “remarkable bravery” of farmers across Ukraine when he met a farmer in Mykolaiv, Southern Ukraine, who spoke to the reporter about his experiences.

Mr Watson described the harvesting of the “farmer’s deadly crop” after the farmer had collected Russian rockets and nose cones from his fields over the last couple of weeks.

Mr Watson said: “Everywhere in southern Ukraine you’ll see people harvesting wheat and grain and they’re doing it amid artillery and frontline combat that is very close by.”

According to Mr Watson there had been 28 artillery strikes in the last 24 hours in the area where at least five civilians were killed in what he described as “the reality of life” in Ukraine.

He added that explosions could be heard from the farm and that burnt out military equipment can be seen lining the various farms while the farmers are out harvesting what can be salvaged. 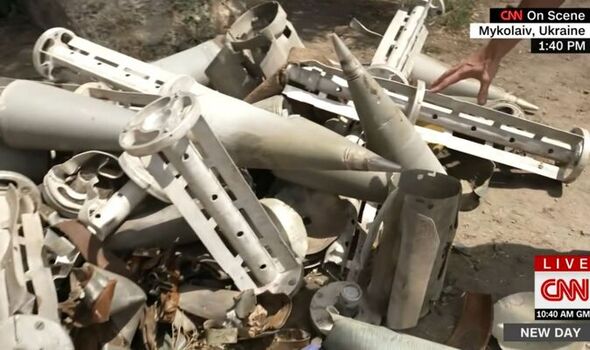 With Ukraine’s fertile-rich soil and suitable land for farming, the nation’s large production of wheat and grain has led to its nickname of ‘the world’s breadbasket’.

Speaking to POLITICO in May, Mykhailo Amosov, a land use expert at Ukrainian environmental NGO Ecoaction spoke about the six or seven million hectares of extremely fertile soil in Ukraine which is now out of action.

Mr Amosov said: “They mined everything they can get, and officials are saying around three to five years will be needed to de-mine this area.

“I see a lot of farmers working in a bulletproof vest because it’s dangerous to be on the field.”

Ukrainian farmer Grygorii Tkachenko, 54, spoke about the process of rebuilding his 1,500-hectare farm in the Chernihiv region in the northeast which was destroyed in March at the beginning of the conflict in a three-day attack on his village, Lukashivka. 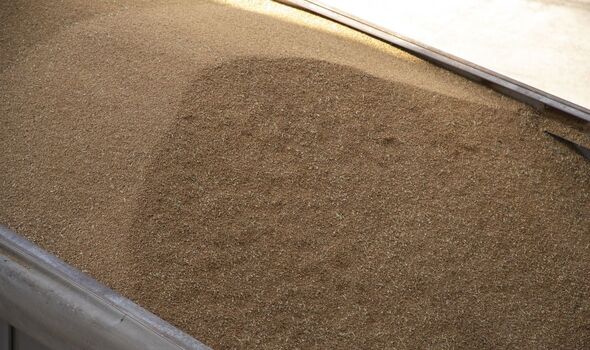 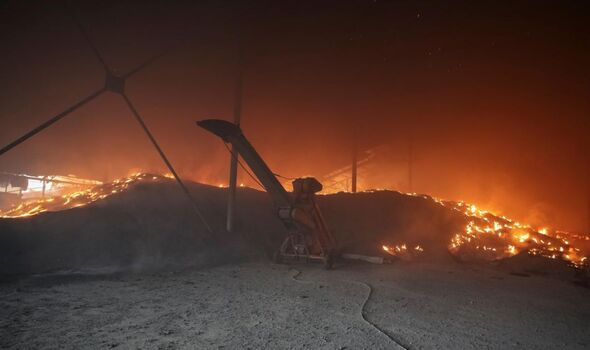 Mr Tkachenko’s farm produced cow’s milk, corn and potatoes and he said: “They fired at us a lot, and we had a lot of unexploded missiles.

He called the Russians “savages” after they “hunted” the cows that had not been killed in the attacks or by shrapnel and who also looted women’s underwear from his family’s property.

Mr Tkachenko promised: “I will rebuild my farm; it will be much better even than it was before the war. There won’t be a second coming of these f*****s.”

Ukraine’s wheat, oil and corn production usually enables it to feed 10 times its own population and exports much of its produce to North Africa and the Middle East. 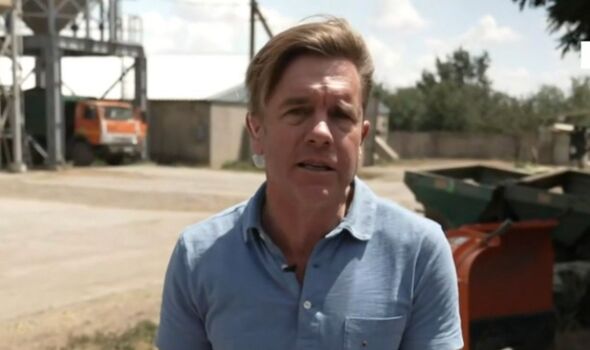 Not only are Ukrainian farmers struggling to harvest their crops, but due to intense fighting and the Russian blockade at Ukraine’s Black Sea ports, the produce cannot leave the country.

It is estimated that 20million tonnes of grain is stuck in silos at Odesa and dozens of ships are stranded due to the blockade.

Fears are increasingly rising following the inflation of global food prices and about feeding the world’s population as the conflict has skyrocketed prices for grain, oil, and fertiliser.

The US Department of Agriculture predicts that wheat production in Ukraine will fall by 33 million metric tons to 21.5million in the 2022-23 crop year.