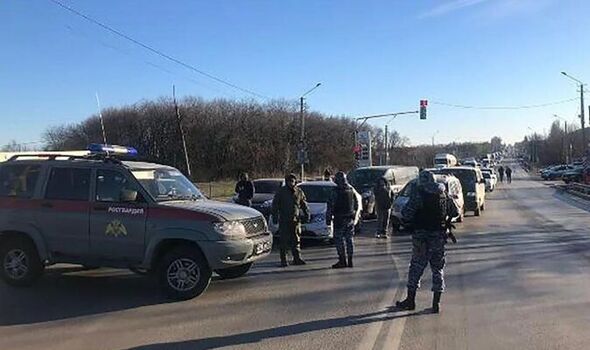 A deserter from the Russian military opened fire on police in the Southern Russian town of Novoshakhtinsk. One officer was wounded by the individual, who was fleeing Ukraine through a forest when he encountered Russian officers near a customs post on the outskirts of the city and fired a machine gun.

The officers had been looking for a missing woman, as reported by news channel 112.

One officer at the very least, named Roman Biryukov, was shot in the pelvis and taken to hospital.

Schools, as well as roads in and out of the city have been closed and residents were told to remain indoors while police search for the suspect.

“The crime was committed in the suburbs of Novoshakhtinsk at 12 pm today.

“A man wearing a camouflage uniform opened fire on police officers, then fled the scene. One of the policemen sustained a gunshot wound,” the Interor Ministry’s office in the Rostov Region told Tass news.

A representative of law enforcement agencies told Tass: “According to preliminary data, gunfire was conducted with a machine gun.

“The shooter, tentatively, is a deserter. A search for him is underway,” they said.

Since war broke out with Ukraine, a series of incidents have taken place involving attacks on superiors by Russian Army recruits.

The Kremlin admitted in September that it made “mistakes” in its mobilisation drive after a man shot a military recruitment officer in a draft centre.

It comes after news yesterday that Ukraine has carried out its deepest strikes inside Russian territory to date in a bid to disrupt the Kremlin’s bombing campaign against energy infrastructure.

Three people were killed and six injured on Monday after a fuel tanker exploded at the Dyagilevo airfield near the city of Ryazan, south-east of Moscow as reported by Russia state-owned RIA Novosti.

A separate blast destroyed the Engels-1 airbase near Saratov, 460 miles south-east of Moscow.

Dyagilevo is about 330 miles from the Ukrainian border.

The base at Saratove is 430 miles from the nearest Ukrainian-controlled territory.

Last month Ukroboronprom, Ukraine’s state-owned arms giant, said it was “finalising development” on a new weapon that could fly 1,000km (621 miles) and carry a 75kg warhead.

It is widely believed to be a drone or loitering munition. It is not known to have entered service, however.