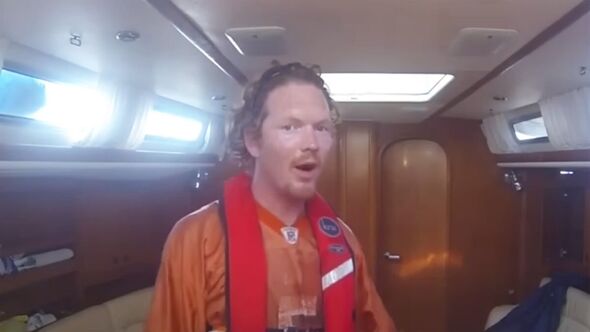 An intrepid sailor has shared the moment he boarded a real-life “ghost ship” drifting in the Atlantic. In scenes reminiscent of the movie Dead Calm Matthew Rutherford and his colleague from the Ocean Research project found the stricken vessel seemingly abandoned.

Mr Rutherford has now shared the video from the search of the ship for the first time and documents what it was like exploring a real-life Mary Celeste, a famous American ship found adrift with no one onboard in 1872.

As they approach the ship Mr Rutherford and his crewmate speculate as to what they might find after seeing “no sign of life” on deck.

As they approach the ship Mr Rutherford and his crewmate speculate as to what they might find after seeing “no sign of life” on deck.

In the famous shipwreck movie Dead Calm actors Nicole Kidman and Sam Neill discover a schooner in trouble crewed only by the character played by Billy Zane.

In the ensuing story Zane’s character is rescued and but proves in be unhinged and attempts to murder them.

Mr Rutherford says: “Well, this is one awfully abandoned sailboat, Wolfhound from the Irish yacht club.

“I have no idea what’s inside, I’m going to go and search around and I hope I don’t find any dead bodies or anything.’

“The place was left in an absolute wreck, I can hear water splashing around underneath of me. I’m afraid to open doors and cabins, afraid of what I might find round the corner.”

Matt opens another door into a sleeping cabin and calls “hello” as he enters.

As he walks through the cabin eventually opening the door to a toilet with a mirror on the way, he points the camera to the mirror and says: “well, no dead bodies, thank god.”

After searching the ship Mr Rutherford sets up the camera to go over what he has just seen. He said: “This is absolutely crazy by the way. Here I am 800 miles from Bermuda, 1,500 miles from the United States, standing on a very nice Swan 48, in the middle of the ocean.”

The astounding video was actually filmed in 2013 but has only now been shared. Mr Rutherford is well-known in the sailing community and in 2017 became the first person to complete a singlehanded nonstop voyage around North and South America.

Mr Rutherford and his crew hooked up the Swan 48 with a rope and did their best to tow the larger heavier vessel to Bermuda.

Mr Rutherford said: “We were running low on fuel, after spending 47 days on the ocean, so we convinced a passing freighter to stop and give us 50 gallons of diesel.

“But after another couple of days of pulling the boat our engine ended-up breaking, so now we had two boats both with broken engines.”

Mr Rutherford said they continued to try and pull the abandoned boat with just sail power alone for another three days, but bad weather meant they had to cut it free when the tow line wrapped around their rudder.

He said after cutting free the ghost ship the wind dropped and he and his shipmates were becalmed in the Atlantic for 23 days in the Atlantic before eventually making it to Bermuda.