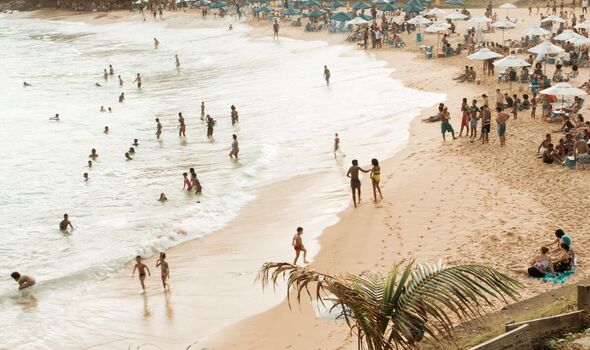 A 19-year-old British tourist has drowned after being caught in a strong offshore current in Portugal.

The identified Brit was with two friends when they were caught in the riptide while swimming near a small sandy beach on the Costa da Caparica coastline south of Lisbon.

The tragedy occurred on Wednesday afternoon on Dragao Vermelho beach, which translates to Red Dragon beach in English.

Emergency services were alerted just before 6.30pm local time, and in response they mobilised a Portuguese Air Force plane as well as police, coastguards and firefighters to help the three.

Two of the three people, who are all understood to be Brits, were able to get out before help arrived.

A search was launched for the third, before his body was discovered on the neighbouring Tarquinio-Paraiso Beach. He was declared dead at the scene.

Portugal’s National Maritime Authority (AMN) confirmed the victim was from the UK.

In a statement, the AMN said: “A 19-year-old young man, of English nationality, died on January 4, on the beach of Dragão Vermelho, on the coast of Caparica in the municipality of Almada, after being caught up in a rip current while he was bathing with two friends.”

The organisation said the alert was received at 6.20pm via the Lisbon Maritime Search and Rescue Coordination Centre.

Lisbon Maritime Police were then dispatched alongside coastguards, parademics and a Portuguese Air Force Plane, the AMN added.

It said: “Upon arrival, the Maritime Police found two of the three people said to have got into difficulties in the water had managed to reach the shore through their own means and they were assisted at the scene by medical experts.

“Searches were immediately initiated for the third person, the 19-year-old man who was subsequently found dead by volunteer firefighters on adjacent Tarquinio-Paraiso Beach.

“He was declared dead at the scene by a doctor.”